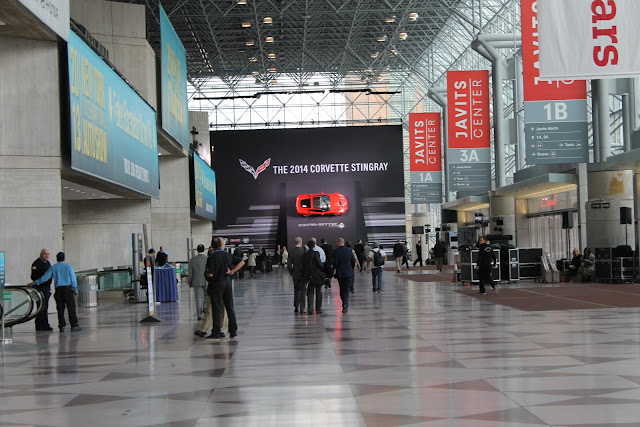 The 2014 Odyssey will have extensive chassis modifications in an effort to receive the top rating in the Insurance Institute for Highway Safety’s new Small Offset Frontal Crash Test. In addition, the top of the line Touring Elite model gets new safety equipment: Forward Collision Warning, Lane Departure Warning, and an Expanded View Driver's Mirror. It will also offer the world’s first in-vehicle vacuum cleaner, HondaVAC. HondaWashN’Dry and HondaStove will be announced sometime later in 2014. 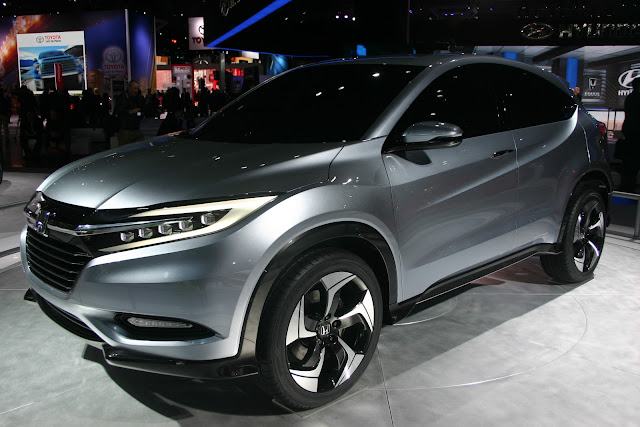 Honda showed this concept at the show, which it says will become the basis for a production model below the CR-V in its lineup. It will likely be based on the chassis of the Honda Fit, being assembled in the same factory in 2014. 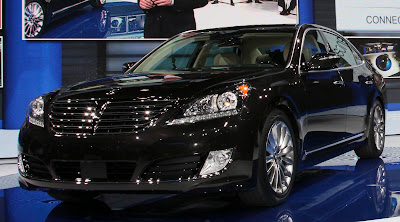 The 2014 Hyundai Equus gets a significant refresh. Available in two trim levels: Signature and Ultimate, it doesn’t allow for further feature variation, which simplifies purchase and helps keep quality high.
The 5.0-liter V8 with direct injection continues with the 8-speed automatic. The suspension receives revised tuning, but is still a front and rear multi-link system air suspension with height control and variable damping.
The exterior gets new wheels, bumpers and grille. The inside gets new dash, displays, rear center console and materials.
Hyundai adds a standard adaptive cruise control that can match the speed of traffic in front all the way down to a complete stop in heavy traffic. All models get three-zone climate control, staggered size 19-inch wheels, adaptive HID headlights (headlights turn with the road), auto dimming inside and outside rearview mirrors with power folding, front and rear parking sensors, rain-sensing wipers, 12-way power driver’s seat with memory, air conditioned and heated front seats, heated rear seats with power recline, power tilt and telescoping steering wheel and blind spot and lane departure warning systems.
The Ultimate trim level adds cooled rear seats, power rear-seat lumbar support, dual rear vanity mirrors, power door closure on all four doors, power rear sunshades, power trunk lid, and a larger navigation display: 12.3” vs. 7”. A heads-up display is also standard in Ultimate, to reduce driver distraction by placing important information in the windshield. Multi-view camera give a seamless bird-eye view to assist in parking and driving in tight quarters, and the Ultimate also has dual 9.2-inch monitors with its standard rear entertainment system.

Part of Hyundai Assurance, along with its 10-year/100,000 mile powertrain warranty, three years of Blue Link will be included on all Blue Link equipped Hyundais free of charge. This system, which can call emergency services in case of an accident, uses embedded cellular technology, so you’re safe even if you forget your phone of it is damaged in an accident. This is a similar system to GM OnStar, but the SYNC system in Ford connects to the driver or passengers’ cell phones, instead. OnStar typically includes a one year subscription, and is standard on all GM vehicles. About half of all Hyundai vehicles will be equipped with Blue Link. 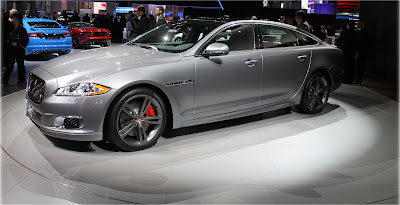 In LA we saw the new XFR-S with 550 horsepower. In New York, the XJ gets that same engine and becomes the new Jaguar XJR. Unlike the last XJR, the new one is available as a short or long-wheelbase model. This is the natural continuation of models such as the XFR-S introduced in LA in November. 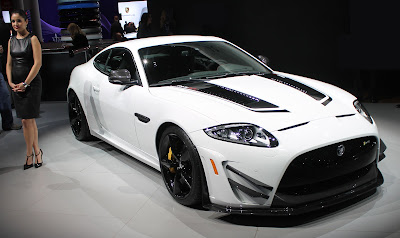 An XKR-S with carbon ceramic brakes and additional aerodynamic and suspension tweaks, Jaguar claims the street-legal XKR-S GT will lap the Nuburgring race circuit 15 seconds faster than the XKR-S.

Jeep is reviving the Cherokee nameplate over the Liberty nomenclature which died with the 2012 model. (In other markets outside the U.S., the Liberty was called the Cherokee the whole time.)
Other than that, the Cherokee is all new. The new Cherokee is based on the same Alfa Romeo platform as the new Dodge Dart. This chassis is front-wheel drive based and features a transverse engine (sideways). It is a unibody platform, but the Cherokee and Liberty have been unibody since 1984. This construction is not only stronger, lighter and safer, but it also allows a greater ground clearance for a given center of gravity, since the vehicle body doesn’t have to stacked on top of the frame.
It is the first production vehicle ever to use a nine-speed automatic transaxle. This transmission is for front-wheel drive based vehicles and should increase fuel efficiency, acceleration and off-road capability.
The 2014 Cherokee features two engines: the 2.4 liter “Tiger Shark” 4-cylinder engine has 184 horsepower and is rated as high as 31 MPG highway (with FWD). This is the same as the top-level Dart engine. The other choice is a new 3.2 “Pentastar” V6. With 271 horsepower at 6500 RPM and 239 pound-feet of torque at 4400 , this engine is derived from the 3.6 V6 in everything from the Dodge Avenger, Chrysler Town & Country and Jeep Grand Cherokee to the Ram 1500 and new Ram ProMaster Van.
Cherokee fans are very worried that the new model is a car that merely looks like an off-road capable SUV. The Compass and Patriot have never been well accepted by this off-roading crowd. Based on the Dodge Caliber platform, they have sold well, but have never been 4Wheel & Off-Road or Four Wheeler award winners, honors that have gone to the Cherokee and Grand Cherokee almost too many times to count. The new Cherokee’s car roots, transverse engine and fully independent suspensions aren’t going to win friends in these quarters right off the bat. The last time a Cherokee was sold in the U.S. it had solid front and rear axles, a North-South pointing engine and a chassis (unibody that it was) that was never shared with anything car-like.
To give it trail cred, the new Cherokee Trailhawk sports an 8.7-inch running ground clearance. It offers three four-wheel drive systems, from a simple one-speed full-time system to a two-speed system with a locking rear differential. It can be rated to tow up to 4500 pounds, only 500 pounds less than the original Cherokee. To finish the off-road theme, Trailhawk Cherokee includes bright red front tow-hooks, skid plates and unique front and rear fascias to emphasize the improved approach angle ability.
The other stumbling block for the new Cherokee is its design. It very radical, with the classic Jeep seven slat grille being bent backwards into the hood. People have labeled it “Jeep’s Nissan Juke, unfortunately…” and its also been compared to the Pontiac Aztek (a vehicle so ugly, they couldn’t bare to spell its name correctly). I think the problems with the design are mostly rooted in the design of the last vehicle called Cherokee: a box with windows and another box stuck on the front.
Head of Chrysler Design, Ralph Gilles summed it up best: “Time will tell.”
The equipment offered in the Cherokee is impressive, including some things not available in the Grand Cherokee, such as an automated parallel and perpendicular parking system. Power heated and air conditioned front seats are offered with a driver’s memory system. A heated steering wheel is also offered and even adaptive cruise control, forward collision warning, blind spot warning and lane departure warning. 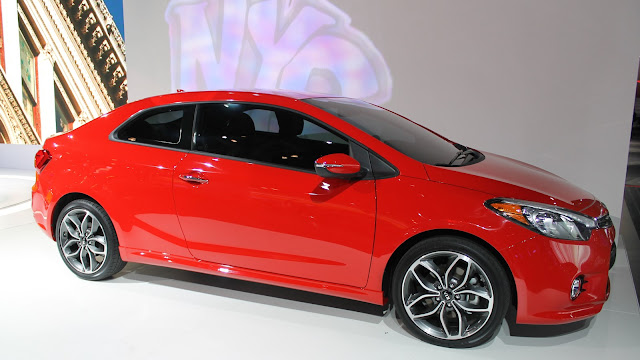 Kia predictably followed up its one (Los Angeles: 2014 Forte Sedan), two (Chicago: 2014 Forte 5-Door) punch with an 2-door uppercut. The Forte Koup is a stylish model, and Kia bragged about its 1.6 turbo (borrowed from the Hyundai Veloster Turbo) with 201 horsepower, but the big news is the amount of convenience and luxury equipment these new Fortes can carry.
The 2014 Forte is the onlyinexpensive sedan, hatch or coupe to offer an air conditioned driver’s seat (sedan and 5-Door also offer heated rear seats), heated steering wheel, and a power driver’s seat with memory. These premium features are a calculated move to separate Kia from its competitors. With fuel mileage and the economy still touchy subjects, offering a premium driving environment in a small, affordable, fuel-efficient package is smart.
So far, only the sedan has announced fuel mileage ratings:
LX 1.8 4-cylinder Manual 25 city/37 highway
LX 1.8 4-cylinder Auto 25 city/36 highway
EX 2.0 4-cylinder Auto 24 city/36 highway 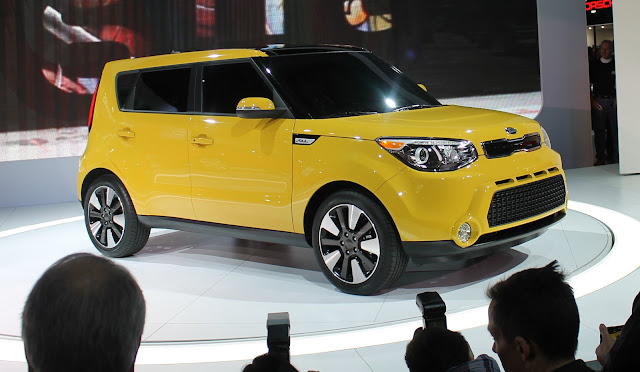 The Kia Soul receives a very nice redesign for the 2014 model year. Everything is smoother, but with a much bigger, more aggressive lower air intake. It keeps its iconic look, which is good, since it was introduced with dancing hamsters. 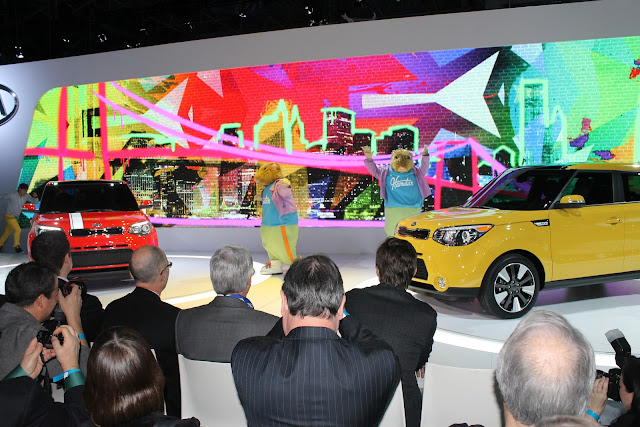 Kia must have gotten a wholesale deal on seat coolers, heaters and heated steering wheels, because the Soul will also offer these premium features usually found in luxury cars. Powertrains are unchanged, but the chassis has been thoroughly reworked, as evidenced by changes to wheelbase, track width, headroom, legroom and other hard points. The setup of the basics of the suspension, steering and brakes also remain the same.
The Soul was hit hardest by the adjustments Kia had to make to its fuel economy ratings, some variants losing 5 or 6 MPG. Nothing in the preliminary specifications suggest mileage will improve on the new model, but the ratings have not been released. Mileage on the 2013 Soul models ranges from 23 city/28 highway up to 25 city/30 highway. 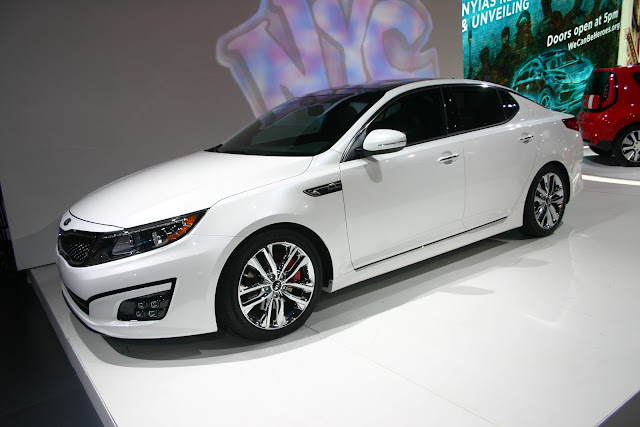 A refresh to the styling of the 2014 Optima rounds out a very aggressive product blitz for Kia over the past few months. In addition to new grille and tail-lamp treatments, the Optima will offer new high-tech safety equipment, including: blind-spot warning system, rear cross-traffic warning, and back-up warning system.

Days before the Jaguar/Land Rover press conference at the New York Auto Show, their were rumors flying around that James Bond’s Daniel Craig would be participating in a highly dramatic presentation of the new XJR and Range Rover Sport. This news made sure that the press conference was completely spilled over, with those waiting for the event for over an hour not getting even close. Mr. Craig did appear in a short film showing him driving the new Range Rover Sport through Manhattan and into the show. He posed with it briefly and left.

Being derived from the all-new Range Rover, the Sport is also all aluminum and hundreds of pounds lighter than its predecessor. This alone will increase the performance and fuel mileage.
To stretch the economy even more, the Range Rover Sport gins an entry-level supercharged V6, first seen this Fall on the XJ and XF Jaguars. With 340 horsepower and an eight-speed automatic, the Range Rover Sport SE starts at $63,495.

This leaves only the Land Rover LR4 on the older platform. Will it see an all-aluminum remake soon?