The LA Car Show in November was full of splash and glitz. The Detroit Auto Show, of course, is still the heart of the U.S. industry. They introduced the new 2014 Corvette Stingray, the Chevy Silverado/GMC Sierra pickups, and the Infiniti Q50 (replacing the G37 Sedan), just to name a few very important premieres. 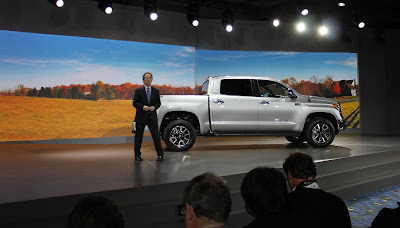 Starting with the 2014 Toyota Tundra, the Chicago Auto Show was heavy in work-vehicles. The Tundra gets new styling, but in a disappointing turn, nothing new mechanically, keeping the same frame, brakes, engines and transmissions (presumably with the same fuel mileage) as the 2013 models. One year after the Ford F-150 introduced a Turbocharged, direct-injection V6; the same year that Chrysler put an eight-speed automatic into it Ram pickups; and only a month after GM introduced all-new powertrains with direct injection, variable valve timing and cylinder deactivation for their Silverado and Sierra, to hear that the 2014 "redesigned" Tundra will have the same 4.0 V6, 4.6 V8 and 5.7 V8, even though these engines are not competitive with Ford, GM and Chrysler for fuel mileage.

Bill Fay, Toyota Division VP, only mentioned fuel mileage once during the presentation, to call out the fact that Consumer Reports magazine had measured the fuel mileage of the 5.7 V8 Tundra better than the F-150 V6 ECOBoost. In EPA ratings, though, the F-150 ECOBoost 2WD is rated at 16 city/22 hwy, while the Tundra V6 2WD is rated at 16 city/20 hwy, 13 city/18 hwy for the 5.7 V8.

The 2014 Tundra doesn't offer heated rear seats or ventilated front ones, luxuries the present model Chevy, Ford, GMC and Ram all offer. The main news was different grilles for each grade (SR, SR5, Limited, Platinum and the new 1794 Edition), new sheet metal, a higher hood and relocation of the trailer harness to the license plate recess.