It was a dark and stormy night. The lightning strike roused me from a fitful sleep, only to see the flashing twelve, zero, zero on the digital clock. Where was I, and why was I here? The silence from the power outage was deafening. I had no other option but try to go back to sleep. The early noise outside my room reminded me to get out of bed and continue what I had started, and the early light revealed a room that Philip Marlow would have never used. It was a small room, barely large enough to cover the bed and a chair. The sink had only one faucet, yet there was a tub, shower and plenty of hot water. The memories of what I had started slowly came back to me.
My ride waited for me outside the door creating some of the morning noise. Some who saw us together said she looked really good despite her age, but I knew better. She was really only 38, and I knew she had seen a lot of hard miles, been around the block you could say. She was British, you know, but could be loud and flashy. We teamed up when her clock counted to only thirty-two, but it seems like it was decades ago. 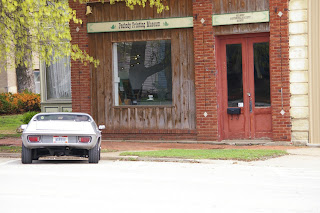 She reminded me of one of those trophy wives, pretty to look at but real high maintenance, if you know what I mean. No matter what anyone said, she was the reason for being here. I just went along with it.
I figured it was about time to join her and finish the job. I was following the leads. Trying to make a big score, hit the early retirement moola. The leads were old and had turned mostly cold. I was trying to warm them up. It wasn’t as easy as I expected. She became a distraction where ever we stopped. All she did was attract attention, like a hot blond in an evening dress at a rodeo.
It is said Cleveland was the money town. Back in the days of the roaring third, and Eliot Ness’ unsolved torso murders, money and alcohol flowed like water. But now the city is on harder times, just trying to turn a buck can take it all out of you, and my first lead pointed to the River. We arrived at the Queen City where the old riverboats had tied up, and followed the money trail. No heat here. The calling was further south to the Bourbon Trail. 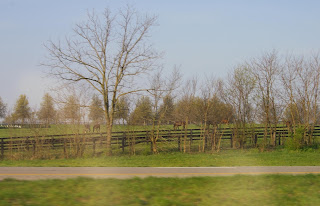 Lexington, Louisville, it’s Kentucky. Bourbon, the blue grass, blue skies, another hotel room, lots of pretty ponies, and white rail fence. No cash to be found. The road now said west. Evansville held no information, so she pointed herself north on a hope. In Decatur Illinois the trail warmed some, but that told us we needed to go from the Land of Lincoln to cow country. Not wanting to wear out our welcome we left for points further west. We crossed the Mississippi at Hannibal; Sam Clemens wasn’t around. Neither was Col. Potter. Following the Victory Highway we ran Missouri to Kansas. The Peabody Museum attracted our attention, but we weren’t properly dressed for the occasion. Face it, now we needed a cattle town. 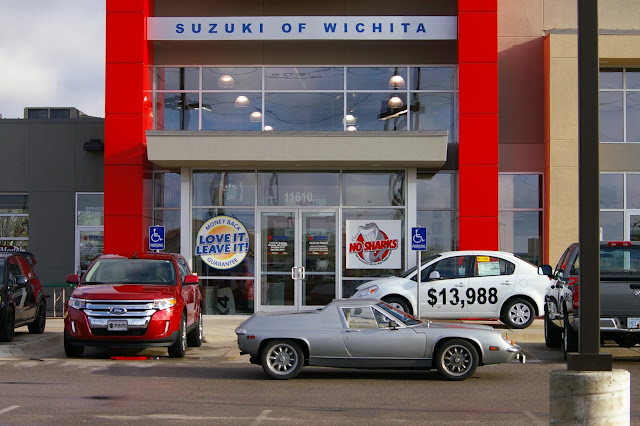 That night we made Wichita, not only a cow town but an airplane capital to boot. Things were finally warming up. But we got there too late to be any good. We needed to wait around for morning. It was too late for Pizza Hut to deliver and White Castle was closed. In the morning we had to drive around the east side to find what we were looking for. It wasn’t at the airport. By then we knew for certain where we had to be, a different city. We had come too far west. Overshot the mark, so to say. We needed to back track to Kansas City, and that explains the little room…
…The city refused to awaken. The storm left the streets damp, and we needed to get to where the streets are known only by their single digits. We had never seen a downtown quite like this. The locals have a name for it. They call it the West Bottoms. The old city center I presume. Near the river, among the tracks, and below the freeway. This hour of the morning it seems as if the whole city is recovering from a Friday Night hangover. It was defiantly morning in Kansas City. The sun shone with an intensity that made you squint. Puddles still remained in spots, and no traffic on the streets. The kind of Silence in a city that tells you something is about to happen. 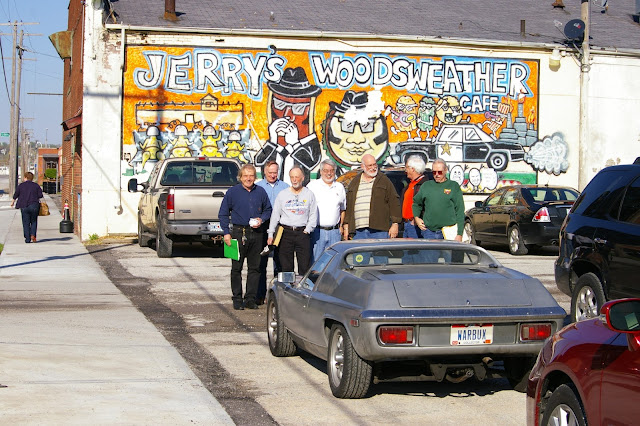 The two of us were looking for the big rollers. You know, the Planes, Trains and Automobile guys. The movers and shakers of their worlds. These are the guys to talk to, the ones who knew everything important. We were convinced they wouldn’t be in Strawberry Hill, this needed to be the place. There they were, parked outside of the Woodsweather. A Porsche, something British, and other expensive imports sitting there waiting for unidentified owners to complete their business. I entered Jerry’s Café and found a noisy ambiance of subtle age. An older building with lots of experience. This place could tell tales of an exciting era from when there was a nightlife and the revelers embraced it here. There they were, like a bunch of mafia dons, away from regular customers, plotting deeds in the back room and eating breakfast like they did it every Saturday morning. We found the right place. She was back again with her kind of people.