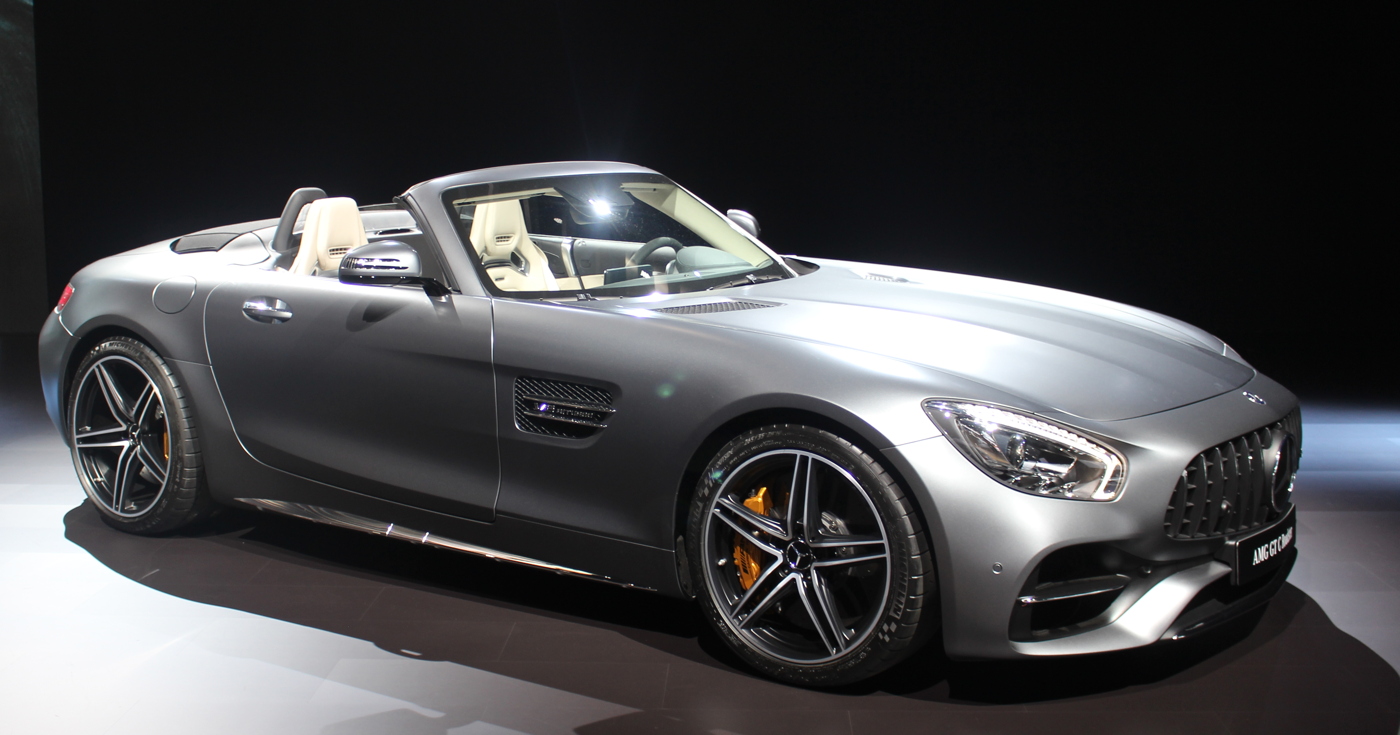 Just to keep everyone guessing, Mercedes tweaks its nomenclature... again. Now letter number combinations have a space between the lettered model name and the numbered suffix, i.e. E400 is now E 400.

Bookmark this page to keep abreast of all the Mercedes changes for the 2018 model year!

The big news is a Roadster version of the GT joins the Coupe.

Other improvements: standard horsepower is up 13 to 469. Standard peak torque climbs to 465 pound-feet, up 22. AMG Ride Control suspension with adaptive shock absorbers is now standard.

Lane Departure Warning with Lane Keep Assist is now standard on the Coupe.

On the AMG C 43 and C 63 a new Track Pace App can record your track times and other performance statistics to an iPhone App for analysis. It can even include video from a GoPro camera.

Sun visors now have extensions to make blocking the sun further back easier.

A heated steering wheel is optional, only on the C 300.

The 2018 CLA got refreshed bumpers, grilles, lights and fascia as well as a new interior for 2017. For 2018 merely a couple of special editions: CLA 250 Ice Edition and AMG CLA 45 Performance Studio Package.

The bargain basement CLS 400 is no more, so all CLS luxury coupe 4-doors (oxymorons supplied by Mercedes-Benz) are back to V8 power, only.

Smartphone integration with Apple CarPlay and Android Auto is standard.

A fully redesigned CLS is on the way for the 2019 model year.

All-new for 2018, the Cabriolet comes in E 400 guise, only... at first. 369 horsepower from a 3.0 V6 and new in a first, the E 400 will offer 4MATIC all-wheel-drive. Among other new conveniences, the steering wheel features touch controls that can be manipulated with pinches and swipes. Reserve judgement until it can be determined that this doesn't strain driver attention.

The sedan was all-new for 2017, the coupe carried over. Now the 2018 E-Class Coupe is all-new, following the road laid by the E-Class Sedan. Offered in one variant at the start, E 400, with the same engine as before (369 horsepower 3.0-liter turbocharged V6), but a new 9-speed automatic with two more cogs than before.

Two solid axles, up to a 621-horsepower twin turbocharged V12. Why mess with perfection? No changes.

2019, however, will bring the first redesign since 2002. Among other things, the analog dash gauges will be replaced with a single, continuous LCD screen. Touch-sensitive steering wheel buttons will replace the conventional switches. Every interior seating dimension will increase, rear legroom by almost six additional inches.

The shape will remain a box and the headlights round.

The 2018 Mercedes GLA also gets refreshed inside and out: new bumpers, fascias, grills, taillights, instrument cluster, etc. The optional bi-xenon lights have been replaced with LEDs; halogen reflectors are still standard. A new 360 degree camera system is optional with a birds-eye view among others available. A hands-free tailgate is now optional: kick your foot under the bumper and it will open or close.

A new Mercedes-AMG GLC 63 comes in three variants: GLC63, with the blocky regular body and a 469 horsepower 4.0-liter twin turbocharged V8, 9-speed automatic and 4MATIC all-wheel-drive; GLC63 Coupe, with the same powertrain, but in the swoopy "coupe" variant of the GLC, with less cargo capacity; and finally, GLC 63 S Coupe, with 503 horsepower. This marks the first "full" AMG treatment of the smallest Mercedes SUV (no the GLA doesn't count).

The GLE300d diesel is gone (probably forever), the GLE 550e plug-in gas-electric hybrid that is two years old replacing it for good.

The GLE 400, with the mild-mannered (relatively) 329-horsepower twin-turbocharged 3.0 V6 is eliminated, effectively replaced by the AMG GLE 43 engine of the same displacement but more horsepower introduced for the 2017 model year. Speaking of more horsepower, the GLE 43 is bumped from 362 horsepower to 385.

The GLS350d Diesel is cancelled.

The S-Class gets a facelift including new headlights, grille (last year's V12 grille), bumpers and taillights. New wheels, a new steering wheel and new upholstery choices round out the refresh. Maybach models get "MAYBACH" in chrome letters within the grille.

The S 450 is the new entry S-Class, carrying a 369-horsepower twin turbocharged 3.0-liter V6 and a nine-speed transmission. S 560 replaces the old S550, reflecting a 14 horsepower increase on essentially the same engine. The 560 should get higher fuel economy due to cylinder deactivation: it can run on as few as four cylinders while cruising.

AMG S 63 gets a tune-up: 603 horsepower and 664 pound-feet of torque, by replacing the 5.5-liter twin turbo with a 4.0-liter with cylinder deactivation. A nine-speed automatic replaces the old seven-speed.

DISTRONIC with Active Steering Assist is now optional. The system is improved, now utilizing the GPS to predict curves and adjust speed accordingly.

Among new features, one that sounds dubious: Touch Control Buttons on the steering wheel. Just when a feature is invented to keep the driver's attention on the road, its modified to distract him. These buttons respond to touch, swipes and controls the multimedia (radio).