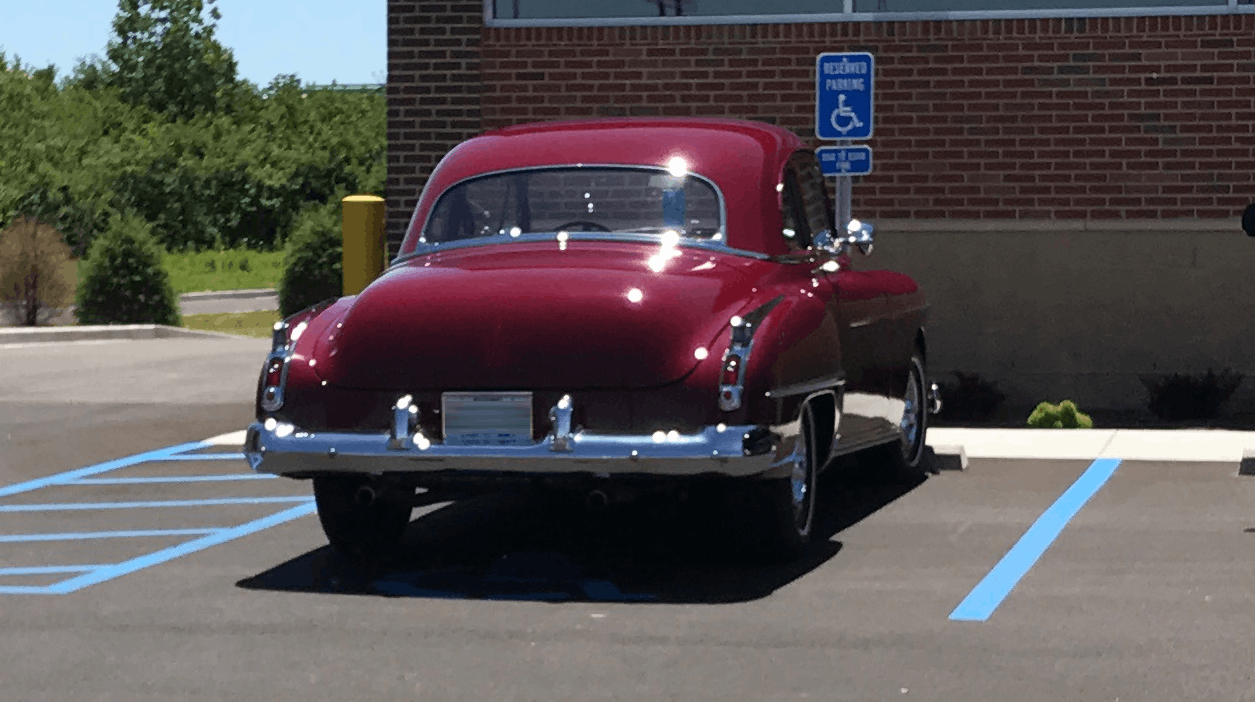 When Oldsmobile introduced the first mass-produced overhead-valve high-compression V8 engine for the 1949 model year, it was said to be the first muscle car. With 135 horsepower it out-powered the flathead Ford V8 by 35% and had the lightest, smallest body of any higher powered V8 cars. Others argue that the 1951 Chrysler Hemi was the first muscle car, with 180 horsepower, but its moderate price and two year jump give the title to Oldsmobile.

Imagine a person's surprise and delight at approaching a local Aldi's and finding this extremely well kept example in a handicapped parking spot.

One of the first cars to offer an automatic transmission (standard equipment), the Hydramatic was actually a four-speed automatic, when other early automatics mostly had two speeds and even almost all manual transmissions had three. The 88 was also equipped with the Rocket V8 engine as standard. This two-door example shows full wheel covers and dual exterior spotlights, popular options in the day. Air-conditioning was not yet offered.

Don't worry too much about its driver enduring the hot Missouri Summer, notice the "wind-wings" integral with the front windows: those corner windows can be angled out to scoop in air, or angled in to scoop it out (great for smokers with finicky family members back in the day). That's just the easily visible extra ventilation feature that older cars had. Foot vents, a dashboard fan, the ventilation fan and a high roof are other design features that helped keep driver and passengers cool in the days before air-conditioning was standard.

The Rocket V8, the 88's signature feature, would grow in horsepower to as much as 400 horsepower in big-block 455 CID versions and Oldsmobile would continue to make its own V8 engines through 1990. Oldsmobile itself would shut down in 2004, six years before sister divisions Pontiac, Hummer and Saturn.