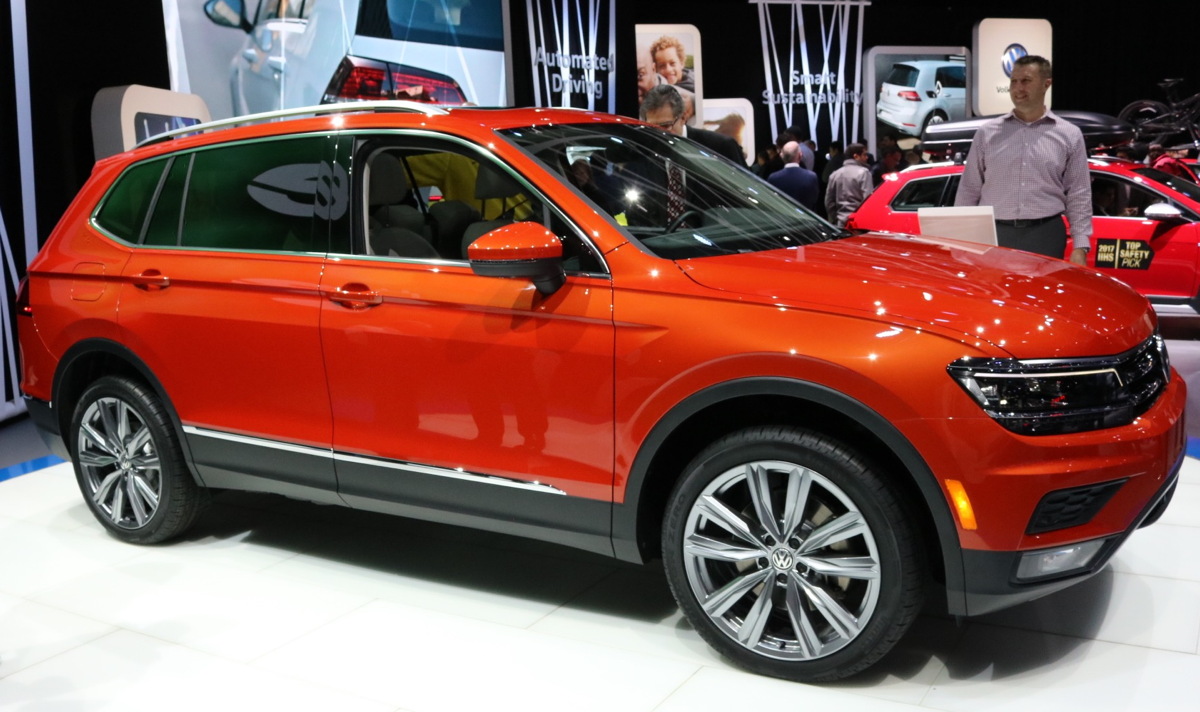 All Volkswagens will receive a new 6-year/72,000-mile bumper-to-bumper warranty which is fully transferrable to subsequent owners.

As we get new information on all of the 2018 Volkswagens, this article will be updated. So bookmark it!

The Atlas is the first 3-row sport utility from Volkswagen. With either a 2.0 turbocharged 4-cylinder and front-wheel drive or a 3.6-liter V6 with front- or all-wheel drive, the Atlas uses corporate VW engines and a ZF 8-speed automatic shared across VW Group.

Both the 1.8T and the R-Line engines are replaced by one 2.0-liter 4-cylinder. Horsepower is much closer to the 1.8T's at 174 (up four) and an identical 184 foot-pounds of torque. Six-speed automatics are still the only transmission, driving the front wheels.

The middle "Limited" model is gone, leaving only the SE and SEL Premium.

A refresh includes new LED daytime running lights and taillights. A single chrome bar in the upper and lower grilles accents the front.

Automatic headlights and rain-sensing wipers are standard across the board, now. Fog-lights are no longer standard on S.

As with all 2018 Volkswagens, it is covered by the "People First Warranty," bumper-to-bumper coverage for six years or 72,000 miles.

A seven-speed DSG replaces the six-speed as the automatically shifting option. It includes automatic engine Start/Stop to prevent unnecessary idling.

Golf R also gets a refreshed exterior with LED headlights and an improved 8-inch infotainment system. Front bumper, grille and air intakes are all redesigned.

The analog style gauges are replaced with the Volkswagen Digital Cockpit, a fully reconfigurable dashboard with full-color animated gauges meant to look like their analog counterparts. Navigation can take up the largest part right in front of the driver, or a large digital speedometer, or even a trip computer with information on fuel range and average mileage.

The standard forward collision warning and autonomous brakes can now detect pedestrians. No word on armadillos.

The 220-horsepower engine from the SE, Autobahn and previous years 's performance package is now the standard engine, relieving the 210 horsepower engine of its duties. When equipped with the DSG (an automated dual-clutch transmission used in place of a traditional automatic) the engine now has an automatic start/stop feature that turns the engine off when idle at stop lights, etc.

The GTI gets a visual refreshing on the outside, with the most striking feature that the red line through the grille now splits up as it continues on through the headlights, which are redesigned into two separate visual units. The side grilles covering the fog lights become much more aggressively shaped. Autobahn and SE models now have LED headlights, which still have the adaptive feature that turns them to help illuminate corners based on speed and steering wheel angle.

The Sport trim is discontinued, leaving S, SE and Autobahn.

Improved color infotainment systems with touch-screens in 6.5-inch (S) and 8" (SE, Autobahn) sizes are standard. SE and Autobahn include a CD player. Satellite radio is no longer available on GTI S.

The Jetta GLI loses its manual transmission, leaving the Jetta 1.4T with the 150-horsepower turbocharged engine as the only manual Jetta. All Jettas get new wheel designs.

The 1.8-liter turbocharged 4-cylinder is replaced by the 2.0-liter, same as in the Beetle.

A new Passat GT is a less expensive way to get the V6 engine.

The Tiguan is all-new for 2018, now on the new MQB platform, which Volkswagen Group uses for a wide variety of vehicles with transverse mounted (sideways) engines and front or all-wheel-drive, including thew Audi A3, Volkswagen Golf and GTI.

The Tiguan will be the largest vehicle on this platform to date, and is an impressive 10.6 inches longer than the previous Tiguan. This allows three seating rows as standard (optional on all-wheel-drive models). Unlike the Atlas, the Tiguan's third row is mostly suitable for children.

One engine powers the 2018 Tiguan, a de-powered 2.0-liter 4-cylinder. Whereas the Golf R makes 292 horsepower from the same size engine, the GTI up to 220, and even the old Tiguan made 200, the new engine only puts out 184. It also puts out a decent 227 feet-pounds of torque. This is because this engine is tuned for low RPM grunt and fuel mileage. It utilizes special variable valve timing and lift that makes it operate with a shorter compression stroke than its expansion stroke, saving fuel.