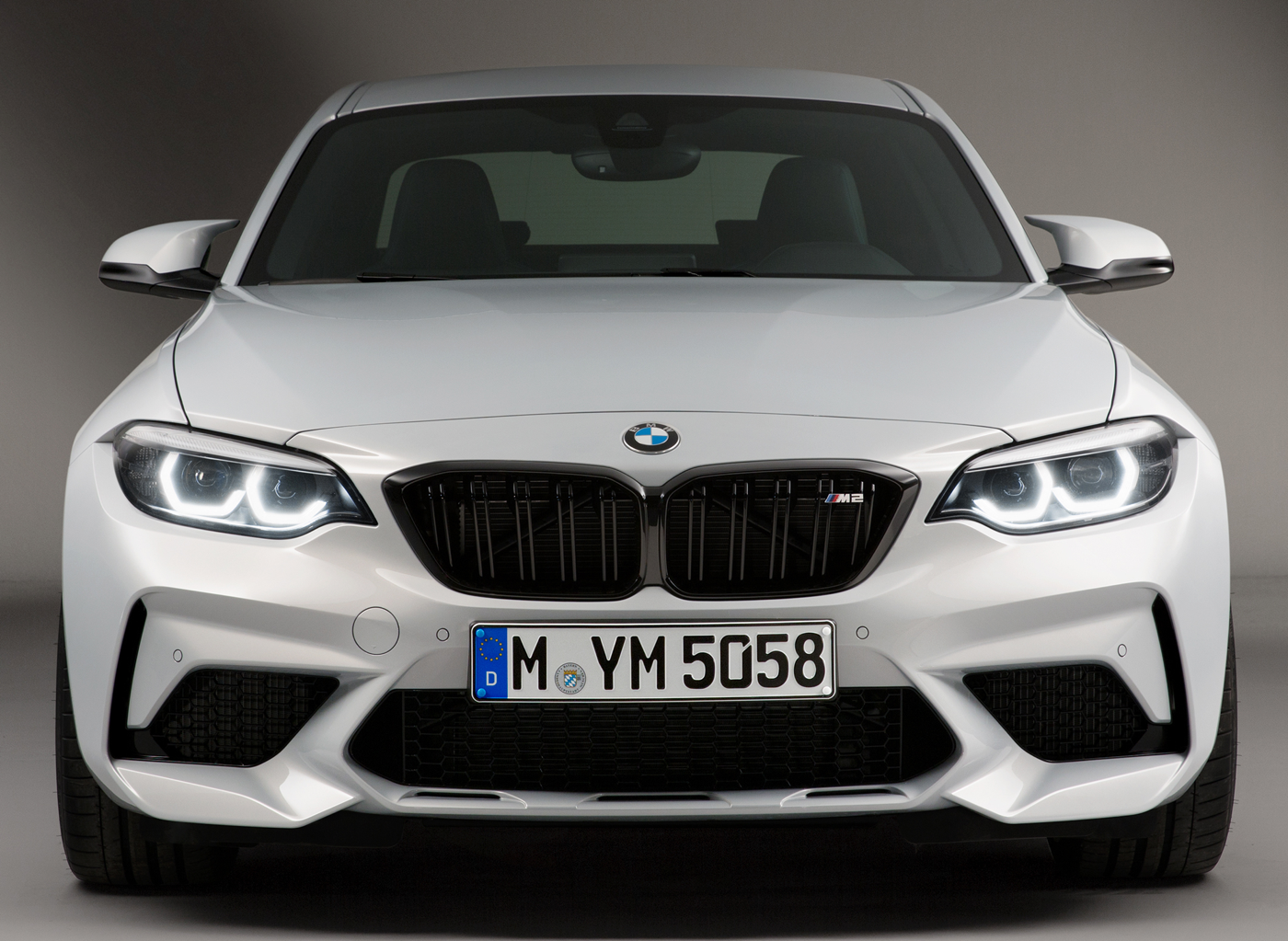 Park Distance Control is now standard, with sensors in the front and rear bumpers to help prevent dings while parking.

#SavetheManuals There is no indication at this time that a manual transmission will be offered on the new 3 Series. While the 8-speed automatic ZF transmission is listed, a six-speed manual is not.

The body changes, though evolutionary, result in a considerably lower coefficient of drag: .26. That is encroaching on Prius levels. Weight is also reduced by over 100 pounds through a mix of high-strength steel, aluminum and other metals. This in spite of the newer car being almost three inches longer, over half-an-inch wider and half-an-inch taller. The wheelbase is also 1.6 inches longer, better to provide a smooth ride and more rear seat roominess.

The electronics are also receiving a major upgrade. Taking a page from Tesla, as many have, the new 3 Series will be able to upgrade its electronics wirelessly over the airwaves. Initial new features will include "Hey, BMW!" a personal assistant with AI qualities. The available navigation system and cameras will keep the start-stop system from turning off the engine at 4-way stops and roundabouts. And did you ever drive forward through a particularly tight path and then find yourself blocked, facing the prospect of backing up a convoluted path? With the Parking Assistant Plus option, the 3 Series can retrace in reverse up to 55 yards worth, automatically steering back through to your beginning spot. This feature is known as "Back-Up Assistant."

Front and rear Park Distance Control (parking obstacle warning sonar) is now standard. The 3 Series Gran Turismo will be all new for the 2020 model.

The 328d Diesel version is dropped. Frontal Collision Warning with City Collision Mitigation (autonomous braking), Daytime Pedestrian Protection, Lane Departure Warning and Rear Cross Traffic Alert are all now standard. Everything else carries over until the wagon catches up with the 3 Series Sedan redesign for 2020.

Refreshed for 2018, no serious changes are made to the 4-Series Coupe, Convertible or Gran Coupe for the 2019 model year.

A new battery pack in all models increases range up to 153 miles, almost 30% higher. New full LED headlights with cornering lights and automatic high beams are optional. iDrive is now standard and a WiFi hotspot and wireless phone charging is available.

A new roadster is now available alongside the familiar i8 coupe. The i8 Roadster uses an electrically operated cloth top with a separate electrically raising glass rear window.

Both coupe and roadster i8 models get 12 more horsepower combined from its turbocharged 3-cylinder engine and electric motor, for a total of 369. Electric range is also higher: 18 miles without using the gasoline engine. The extra horsepower all come from improvements to the electric side of the equation.

The M2 is dead; long live the M2 Competition! The M-ness of the high-output variants of the BMW 2 Series has been increased steadily since its introduction to the United States as a 2014 model. First their was the M240i, with its slightly above standard issue 335-horsepower 3.0-liter inline six-cylinder, staggered performance tires, available 6-speed manual and 13.4" brakes. Then the actual M2 came over as a 2016 model, with its 365-horsepower, 245/35R19 front 265/35R19 rear tires, available 6-speed manual or 7-speed dual-clutch and 15" brakes.

Now, the M2 Competition replaces the M2. That's right, replaces it. With 405 horsepower, 406 pound-feet of torque and the cooling system from the M4 Competition Package, this engine is the closest to the plant in the M3/M4 for the little M2 to get, lacking only 20 horsepower. The 6-speed manual and 7-speed dual-clutch remain.

The M2 Competition gets a new trunk badge to match its new name.

As the M2 gets souped up, the M4 is backing down. The ferocious M4 GTS model is no longer offered, making last year's Competition Package 444-horsepower engine the most powerful one offered.

Active Driving Assistant is now standard, including Lane Departure Warning, Pedestrian and Frontal Collision Warning with City Collision Mitigation (Automatic Braking) and a Speed Limit Information System. Park Distance Control is now standard, with sensors to measure the distance to obstacles to the front and rear while parking.

Memory for the passenger seat is now standard as the standard number of power adjustments on the front power seats go from 22 down to 20; I don't think anyone will miss the extra adjustment.

A new M5 Competition gets an additional 17 horsepower, for a total of 617. Firmer motor mounts help power transfer and keep the chassis stiff, while the exhaust is specifically tuned to deliver a "sportier tone." The chassis is more tightly sprung and the height is lowered two tenths of an inch. Other exclusive features of the M5 competition include ultra-lightweight wheels, high-glass black painted door handles, side mirrors, rear spoiler and grille. Gloss-black "M5 Competition" badges are also included.

The X2 gets a new, more powerful, variant: the X2 M35i. Still powered by a 2.0-liter turbocharged 4-cylinder, the M235i boasts 302 horsepower and 322 pound-feet of torque, BMW's most powerful 4-cylinder ever. The brakes are also upgraded and it offers a new adaptive suspension (also optional on s/xDrive28i models). 19-inch wheels are standard and larger 20-inch wheels are now offered. This is now a direct competitor to the Mercedes-AMG GLA 45.

A two-wheel drive version has been added to the lineup: X3 sDrive30i with the same 248-horsepower 2.0-liter turbocharged 4-cylinder as the xDrive30i model. The M40i model returns as all-wheel drive, only.

The first sport utility BMW built is being redesigned for the 2019 model year. The xDrive35i becomes the xDrive40i with 35 more horsepower. The xDrive50i gains 11 horsepower but keeps its name. Both get new 8-speed ZF transmissions with wider ratios: better for off-road with a lower 1st gear and better for fuel mileage with a higher 8th gear.

With an inch-and-a-half more wheelbase but only barely an inch longer overall, the X5 is over two and a half inches wider and has a track wider by an inch and a half. The new X5 is almost a half inch shorter though.

Another feature of the Driving Assistant Professional is "Emergency Stop Assistant." If the driver feels he is going to be suddenly incapacitated, he pulls the parking brake switch, the X5 then carefully stops in place or pulls over to the shoulder, activates the hazard lights and uses BMW Assist to call for emergency personnel.

All of the new electronics in the X5 can be updated automatically through the air.

The new, large, three-row sport utility from BMW arrives in March of 2019. With 335-horsepower worth of 3.0-liter turbo 6-cylinder or a 456-horsepower twin-turbocharged V8, BMW extracts comparable acceleration to the X5 with which it shares these engines by using numerically higher final drive ratios (lower gearing). The third row has 33 inches of legroom, which means it's actually for adults.

A full menu of safety is standard: front airbags, side airbags, curtain airbags for all three rows, antilock brakes, stability control, front collision warning, automatic front braking, blind spot warning, rear cross traffic alert, lane departure warning and an advanced driver attention warning. Adding a package even gets you a system that can steer you and start and stop automatically for traffic jams and also has a feature that can safely bring the car to a stop and call emergency services if the driver is incapacitated.

All X7 models will have standard xDrive all-wheel drive, at least for the present. An off-road package is even offered, with a locking rear differential.

Shared with the new 3 Series sedan, the X7 offers "Hey BMW" personal assistance features. The exact breadth and width of the abilities of "Hey BMW" will have to be fully tested, but one example is to say, "Hey, BMW, I'm cold," and the climate system will increase the cabin temperature. Not sure if you say, "Hey BMW, I'm hungry," if it will order groceries through Amazon, swerve into a McDonald's drive-through, or book you a table at The Four Seasons.

We've missed the Z4. Gone for a year, it returns with new engines, a new soft top and a tall blonde, standard. Okay, the blonde is extra. The all-new Z4 will be a joint venture between BMW and Toyota. Two engines will be offered: sDrive30i has a 255-horsepower 2.0-liter turbocharged 4-cylinder and M40i has a 382-horsepower inline 6-cylinder turbo. Both are only offered with an 8-speed automatic no #SavetheManuals. Rear-wheel drive makes these true sports cars: no all-wheel drive will be offered.

An optional M Performance package will lower the suspension almost half an inch and adds electronically adjustable shock absorbers, larger brakes and a locking differential. It is standard on the M40i model. 18-inch wheels with 225/45R18 front and 255/40R18 rear tires are standard; 255/35R19 front and 275/35R19 rear tires are optional. The standard suspension includes double-wishbones on a MacPherson strut design in front and a multi-link rear setup. Running on a short 97.2-inch wheelbase but a wide approximately 63-inch wheel track, the Z4 has a tidy 36-foot turning diameter. Curb weight starts at a moderate 3287 pounds.