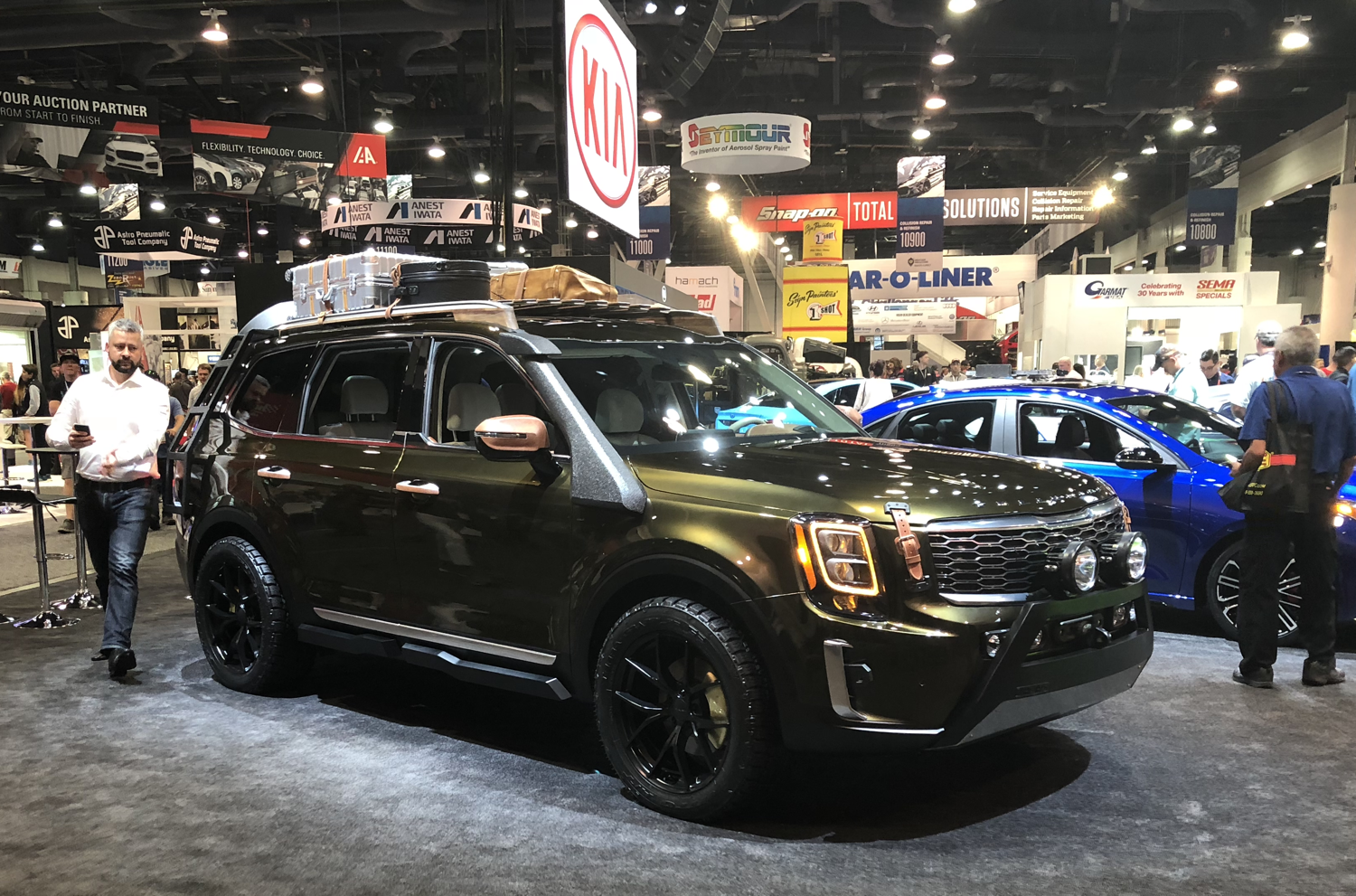 By: KEB Category: Kia Created: 2018-11-07 Tags: 2020, Kia, SEMA, Telluride
Kia Motors’ largest and most refined SUV, the all-new 2020 Telluride was previewed at designer Brandon Maxwell’s 2019 New York Fashion Week show in September. The one-of-a-kind design was the result of a collaboration between Maxwell and Kia’s U.S. design studio in Irvine, California.
This customized Telluride is based on the concept vehicle shown at the 2016 North American International Auto Show in Detroit and features specially tailored design touches that play homage to Maxwell’s Texas roots, including:
* Saddle inspired, double stitched leather adornments- dash, door panels and grab handles.
* Leather accents on outside rearview mirrors and door handle
* Custom from and rear bumpers, skid-plates and step sills
* Snorkel for deep-water fording
* Burly 256/50R20 off-road tires
* Flat black alloy wheels
* Custom-mounted spare tire
* Metal and leather-trimmed cargo area
* Custom wood and aluminum roof rack
* Tailor-made leather tow stop tongue
The NYFW Kia Telluride has unique trims, including special leather and wood trim that won’t see production. Otherwise, the cabin isn’t likely to change all that much.
While we attended 2018 SEMA Kia brought out this car and we were able to get a few Key features that might be available. The Telluride will likely have a heated steering wheel, two memory slots for the driver. Passenger side memory seats are unknown at this time. Heated and cooled seats will be available for the driver and front passenger and also for the second row passengers. One each USB charger ports on the driver and passenger chair for back seat charging. Second row side window sunshades. Third-row specs are unknown at this time. Kia stated that the "Brandon Maxwell design of the Telluride will not be available for purchase. The Telluride will be assembled in the United States from U.S. and globally sourced parts." That makes this sexy-smooth-luxury model unavailable for us.
Kia partnered with LGE-CTS motorsports to conceive four special-built Tellurides; these four new concepts Tellurides were released at SEMA: The Horizon Roamer, Cadet Leader, Desert Drifter, Baja Gilder, each themed after different off-road environments. While we don’t know for sure if these models will become available for purchase, some of the design traits will find their way onto option sheets or into the parts department as aftermarket accessories.
Sources say that The 2020 Telluride official debut is January 2019, at the North American International Auto Show, and soon to be in showrooms.  it is still unknown the exact time-frame when the Telluride will be released publicly, Sources believe fall of 2019, others says the Telluride is planned to go on sale in the U.S. in the first half of the year. The only powertrain details at this time: a V6 engine. We would posit the 3.8 from the K900 or the 3.3T turbo from the Stinger.
The last time Kia introduced a large, rear-wheel drive body-on-frame SUV into the United States it couldn't have been at a worse time: 2008. As the economy plummeted and gas prices soared, the Borrego only got the one model year, 2009. Its replacement, the Sorento offered 4-cylinder and V6 engines, only and was unibody and front-wheel drive or all-wheel drive. The Telluride should face a better fate.