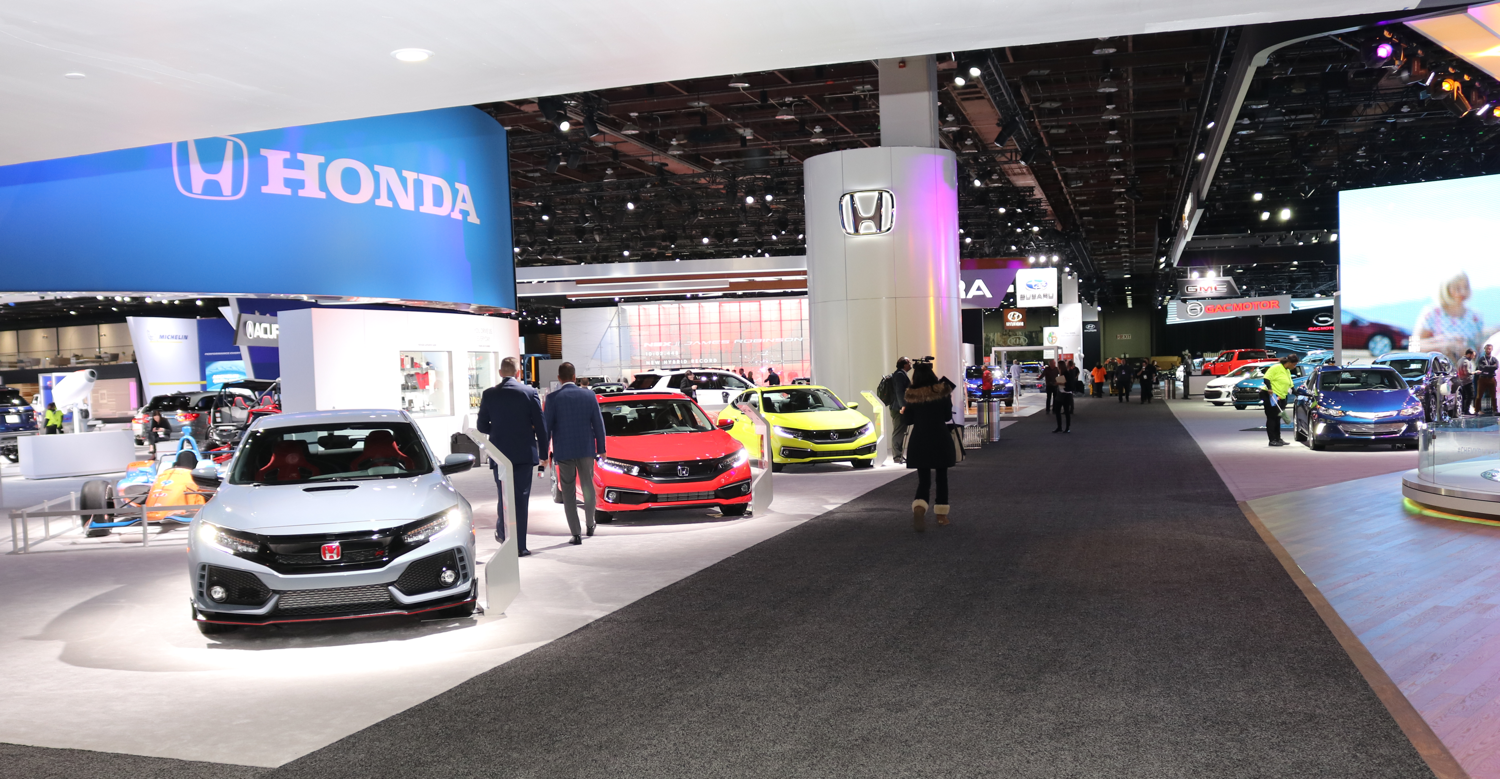 Simply known as the "Detroit Auto Show," this year was the 30th anniversary of the new name and new scope of the NAIAS. Detroit leaders successfully transformed the show into an international powerhouse with introductions such as the Dodge Viper and the entire Lexus division in that first year, 1989. Lately, though the show has taken hits, with BMW, Jaguar, Land Rover, MINI and Bentley missing this year. Facing a conflict with CES (Consumer Electronics Show) in Las Vegas and freezing weather, this is the last year for the NAIAS to be held in January. The show moves to June next year.

So, what could you see at the Detroit Auto Show in its last year covered in icicles?

Right in the lobby Detroit shows its colors: The NAIAS is an industry show. If Chicago is for consumers, New York is for Designers and Los Angeles is for Environmentalists, then Detroit is for the automotive industry itself. Here, a cut-away of an Acura RDX displays steels important place in automobiles. Sponsored by the Steel Market Development Institute, the display shows the importance of different grades of steel in safety, cost-control and even weight savings. Although car buyers will appreciate a look under the skin, this display is intended to sell steel and sell it by the millions of ton.

Cummins was also in the lobby, showing off the newest version of its 6.7-liter turbo diesel inline 6-cylinder. The oil filter hints at the application, and a new product to be unveiled inside. The torque on this engine hits a maximum of 1000 pound-feet, putting it at the head of its class.

Its been anticipated, at least since the Lincoln Aviator reveal last year, but at last, here is the 2020 Ford Explorer. Returning to rear-wheel drive, it will offer at least one hybrid powertrain and a twin-turbocharged 3.0-liter V6.

The new Explorer becomes the second sport utility to earn the ST tag, now that Foci and Fiestas will no longer be made. This marks a sharper performance model than the previous "Sport."

The interior is all-new, also, and features a floating center screen for control purposes, similar to Mercedes.

This was one of the most anticipated introductions: the Ford Shelby GT500. With a supercharged, beefed up Voodoo 5.2 V8 and the promise of over 700 horsepower, Ford wants this Mustang to take on the Challenger Hellcat and the Camaro ZL1 1LE. For the latter, this Carbon Fiber Track package includes all manner of aerodynamic tweaks, including a huge, adjustable rear wing that gives more downforce than the Ford GT and carbon fiber wheels that weight only about 18 pounds each. 16.5-inch front brakes trump any stop hardware on Chevy or Dodge.

Does that front grille look huge? It's twice as large as the GT350's snout, all to suck in air to cool two engine radiators, two supercharged intercoolers, a transmission cooler and an oil cooler. Add a rear differential cooler and a/c coils and this thing will make a radiator shop owner rich.

This Cadillac was one of the best things at the show. It isn't new, it isn't coming out soon. You couldn't sit in it.

It was meant to represent all that was great about Cadillac, but in a way it showed what they're lacking: evocative, beautiful designs. Daring, real model names. Convertibles.

The XT6 fills in the gap between the XT5 (previously SRX) and the Escalade. You would think a three-row 7 or 8-passenger Cadillac crossover would be cribbed from the Buick Enclave and Chevrolet Traverse, but with its 112.7-inch wheelbase it is actually more closely related to the smaller GMC Acadia. A 310-horsepower 3.6 V6 is standard.

The 2019 Ram HD made a big splash in Detroit. The 3500 will offer an optional H.O. Cummins turbo diesel with 1000 pound-feet of torque. Maximum towing will be 35,100 pounds and maximum payload will be 7680 pounds, both tops for pickups. Previously Ram had to fudge to claim top towing, stating that the Ford F-450 was not in its class since Dodge didn't build a pickup in that weight class. Now the Ram 3500 beats it fair and square.

The design follows the new 2019 Ram 1500, including the gorgeous luxury interior that one the 1500 many awards, including Car and Driver Top Ten best pickup and Motor Trend's Truck of the Year.

A new Power Wagon is included! It will have a 360-degree camera with a forward view with computer-generated guidelines to help traverse obstacles off-road.

With a lot of big players skipping the NAIAS, someone was bound to fill the vacuum. Enter, GAC, a major Chinese automaker announcing their intention to enter the U.S. market.

These are some of their native Chinese vehicles, none of which are immediately headed to our shores.

To prove they're serious about the United States, they've opened an engineering complex in Michigan and a design center and headquarters in California. The design center is responsible for the Entranze Concept, above. Hence the blacked-out California plates. There is no explanation for the 20-sided dice hanging from the windshield.

The IMs is a concept of what an advanced electric sedan would look like. It features two electric motors, one front and one rear for a total of 483 horsepower. Its floor contains a 115 kilowatt-hour battery, good for a theoretical 380 miles of range.

Those are rear "suicide" doors, made relevant by Bentley, but always welcome on a concept. Inside the steering wheel disappears when not needed; this one runs fully autonomously.

That tiny badge under the "SL" trim label is the only visual indicator that this Leaf has more range than a Tesla Model 3: 226 miles. The motor is beefed up: 45% more horsepower and 14 pound-feet more torque. And finally, that "Plus" gets you faster charging... 50% faster.

Another World Premiere for the Detroit show, thirty years after Lexus made its debut at the NAIAS, the LC Convertible Concept does the same. The LC Convertible is more prototype than concept; from its tonneau to its interior nothing about this couldn't be produced in a factory, though it does need a top. Lexus promises a proper soft roof.

LA saw the unveiling of the Palisade. Detroit gives us Kia's version of the new three-row crossover from Korea, the Telluride. Boasting a 3.8-liter V6, front or all-wheel drive and an eight-speed automatic, this guy has the specs and the looks to succeed. Remember, their last try, the Borrego, came right in the middle of the recession, got poor fuel mileage and lasted only one model year.

This concept represents Infiniti's first all-electric vehicle. As such, from the outside, it looks a lot like the electric Jaguar I-Pace, especially the sloping roof-line.

The interior is not quite pure fantasy: a steering wheel remains and the seats face forward. A production version would probably have to lose the flower vase. (Maybe not, remember the "new Beetle?" - Ed) As a concept, no hard specifications came with this one.

With 341 horsepower, bigger tires and stickier brakes, this is a special edition WRX that is actually special. The engine even utilizes manual water sprayers to cool the intercooler. An aerodynamics body kit widens the car by almost two inches and the track by 0.6. Only for the U.S. Only about 200. Numbered dash plaques. Get in line.

Toyota had a bevy of its concepts. That's the Concept-i in the foreground, the CONCEPT-i Ride in the background and the CONCEPT-i Walk to the right.

You all have seen that famous click-bait phrase: "Wait until the end!" Well, here it is, the 2020 Toyota Supra.

And just like all click-bait, its never as good as the hype and build-up indicate. 335 horsepower, rear-wheel drive (no AWD), no manual transmission, built by BMW. If it were a movie it would be titled "Somewhat Quick and Annoyed." An inline (BMW) 6-cylinder turbo will be the only power-plant, though a 4-cylinder (BMW) turbo may come later. The only transmission will be an 8-speed automatic. BMW, with its related Z4, has exclusive rights to the convertible version, so a 2-door hatchback is what Toyota faithful get.