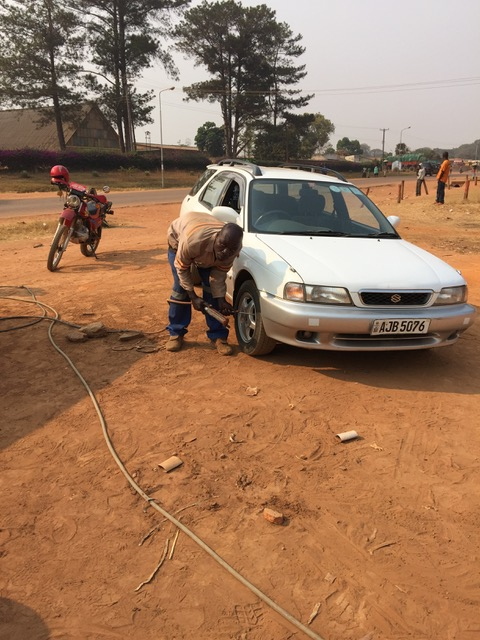 Right before Christmas, I drove my truck into my suburban, Midwest backyard and put it on blocks.  Happy holidays, neighbors!  This wasn’t by choice, of course.  I hadn’t had the truck that long, and it was shaking violently when stopping.  The safety inspection had checked out, but I figured, “better safe than sorry.”  I took of the front, passenger wheel.  The pads and rotors looked fine.  I put the wheel back on and pulled off the rear, only to find that the caliper guide pins had seized.

The rotor was sheared in half.

Mystery solved, new pads and rotors were definitely in my future.  Thankfully, I had thought ahead and already ordered the major pieces online; but, I hadn’t thought to order new guide pins or caliper brackets.  With Christmas morning approaching and the entire tri-state area using UPS and FEDex to send gifts, the likelihood of getting parts quickly was impossible.  Even the local stores were on backlogged due to shipping.  So, I had to wait… FOUR days, and my truck was on blocks for Christmas.

In the big scheme, four days is nothing.  It’s easy to take for granted how great American logistics are.  “First World Problems” is a term that gets thrown around about these kinds of delays and difficulties that really aren’t as bad as we sometimes feel.  But I recently worked on a similar problem in the developing world that did became insurmountable because African logistics were unable to get me car parts.

Car Chat is proud to support Living Hope International (LHI), a charity that works to educate and help orphans around the world.  I had the honor of working with some of the LHI crew in Livingstone, Zambia in Africa, where they are working to build a school for a village just outside the city.  To get around, the LHI staff had been driving a 1997 Suzuki Cultus Crescent Wagon. This great little four cylinder, all-wheel drive car, that had been converted from automatic to a manual and was patched together with all kinds of “fabrication.”  Most recently, the vehicle needed shocks and CV boots.  The problem is that this vehicle came straight from Japan through an outsourcing program and parts are not available.  In fact, after a recent search, the staff could only find one other comparable Suzuki in the whole city.  There isn’t exactly an AutoZone on the corner in Livingstone.

Zambia just doesn’t have the logistics.

Adding to the problem, roads are not great.  During the rainy season, deep ruts and heavy runoff make trucking very difficult.

AutoZone actually has stores in South Africa, but the closest location is about 11.5 hour drive from Livingstone.  And, with gas prices about 4.4 times the US rate, driving is not cost effective.  Online shopping to buy a part is possible in Africa, but the infrastructure challenges to shipping are only part of the problem.  There are no receiving stores that a company like AutoZone can send parts – no “ship to store option.”  That means that often heavy parts have to find their way to an actual residence or business through an unreliable postal service.  Not only do packages take months to arrive, if at all, but they are often pilfered or are delivered broken.

Public transportation has become a pseudo-shipping solution used by locals.  Making calls to friends or local fabricators, custom ordered parts are often loaded on passenger busses and sent to the destination nearest the customer’s location. Obvious problems to this system are theft and mishaps that leave people stranded, waiting at bus stops for parts that never arrive.  Because of these challenges, LHI’s Suzuki, in service since the early 2000’s, has been sitting idle for almost five years!

I decided to do something about it.  In fact, I knew that another US based LHI worker was scheduled to travel to Livingstone in the next few months after my departure, so I did some quick research so he could purchase and bring over the shocks the car needed.

If you’ve never heard of the Suzuki Cultus, you’re not alone. It turns out though that the Cultus has an American cousin thanks to a joint venture between General Motors (GM) and the Japanese based Suzuki.  GM borrowed Suzuki’s design and marketed the popular M platform, which was branded in the US as the Chevy Esteem and Geo Metro, along with some other variants.  Around the world, Suzuki successfully marketed the vehicle as the Cultus, Esteem, and Sprinter, which was popular in developing nations for its reliability and fuel economy.  Suzuki sold well until 2007, especially in India and with broad sales in Europe and Asia where all the models were basically the same with minor modifications for the region in which they were sold.  This was true everywhere except for Japan.  The Japanese Suzuki’s were just a bit different from the shared GM platform, which made finding parts especially difficult since LHI’s vehicle was Japanese.

In the end, I found an Asian company called KYB that distributes shocks as replacements for all these models.  I tracked down this part’s model number and made a wager on the closest Geo Metro part I could find, since these are so plentiful and economical in the States. We bought our best guess and the next LHI worker forewent his personal gear to haul the parts in his luggage during the 18 hour flight to Africa.  As you can guess, he got stopped at every airport security screening.  But, he finally arrived in Livingstone and delivered the parts to the team.

The answer was what our Zambian friends have figured out by necessity.  When the “direct fit” part just doesn’t fit, you have to fabricate a new one or modify what you have.  So, the team set out to make their own parts with the shocks we provided them. Finally, they were successful and got the Suzuki back on the road, only to have the CV joints fail almost immediately.

In the past month or so, the team found a new distributor opening up near Livingstone that deals exclusively with Japanese vehicles.  After searching and negotiation, they finally got real, OEM CV joints for the vehicle and are now finally back on the road.  The process took so long and has been so frustrating though, that the charity has put the vehicle up for sale and decided to invest in Toyota vehicles because replacement parts are much easier to find.

The next time you have to wait a few extra days for your Prime Shipping or are debating if you can save a few bucks with the “ship to store” option, remember our friends in Zambia and be thankful to live in such a logistical paradise as our USA.  Oh, and if you know anybody looking for a great Suzuki, good on gas, lots of “new” parts in Livingstone, have them give us a call. You'll have to come get it: we don't deliver.

If you want to help us support LHI, consider a donation because they are making a difference, one community at a time.  Find them on the web at www.LHIhelps.org

Not taking it for granted,