By Mr. Lemmon.
Detroit— All of you from outside of New Orleans will have to forgive my characterization of the Woodward Avenue Dream Cruise in Detroit, Michigan, but as a New Orleans boy the event begs the comparison. Over a million people attend a free, open-air party, nominally hosted by a loose group of organizations and municipalities, with strong smells (gas fumes instead of the more obnoxious odors of Mardi Gras), few rules and plenty of food. No admission is charged, but restrooms are for customers only! Plenty of impromptu stands hawk t-shirts to remind the participants of what they experienced and taunt their friends about what they missed.

In New Orleans, family or friends walk together in themed costumes (How I still remember the dozen bees, ages one to ninety, walking down Canal St. when I was seven-years-old.); at Woodward, car club members congregate in the parking lots and on the street. We saw a parade of almost a dozen Chevrolet SSR’s, a sight that would be surreal anywhere, any-when else. At night in the parking lot where stragglers refused to call it a night, Audi’s parked next to Audi’s, Neons congregated together and jacked-up monster trucks held council with their kind.

As we drove up Woodward early Saturday morning, as advised by our hotel clerk, we saw cars already claiming their parking spots. Chairs placed in parking lots, non-official plastic tape strung between trees, even a hand-made grandstand only a few feet wide and a few feet tall, the audience staked their claims to their territory, much like New Orleans residents putting ladders and couches on the St. Charles Avenue neutral ground (median to non-New Orleanians). As the show slowly started, families sat in their lawn chairs, coolers tucked underneath and children kept close. A 1965 Pontiac GTO drove down the street, its engine loping loudly. A small boy, about 3 yells and waves at the Goat and the driver races the engine, making the boy smile.
The differences between New Orleans Mardi Gras and the Woodward Avenue Dream Cruise are very real. Whether it’s a lack of New Orleans’ lax alcohol laws, or just the overriding necessity of safety at an event with over 40,000 privately driven motor vehicles involved, booze did not seem to be a factor at the Dream Cruise. “Pop” flowed freely, whether brought from home in a cooler, purchased at a convenience store at the Avenue, or passed out for free by businesses like Barrett-Jackson Auctions who gave away hamburgers, chips, brats and pop.
The biggest difference was in the divide between spectator and participant. In New Orleans, Mardi Gras consists of participants who pay thousands in Krewe fees, pay thousands of dollars more for throws and ride the floats, throwing beads, doubloons, cups and more to the throngs. Then, down below are the spectators, yelling, “Throw me something, mister!” jumping up and down, catching their prizes, eating, drinking, and watching the show. On one side of the police barricades are the marching band members, drum lines, Shriners and Mardi Gras Indians, in their costumes, giving their all. On the other side are the families, tourists and lookers-on.
Not in Detroit at the Dream Cruise. Here, a dad and his kids will park in their 1955 Chevrolet, set up their lawn chairs and watch as vintage Beetle convertibles, Studebakers, and Corvettes cruise by. The driver of a 1956 Buick will stop to take a picture of the dad’s immaculate 1955 Bel Air done in two-tone turquoise and cream. Later on, after the kids have grown restless, the father will pack up his cooler, chairs and kids and relinquish his spot to cruise up and down Woodward himself. Taking his place will be the 55-year-old man and his wife driving a 1955 Austin-Healy, his left leg tired from working the clutch all morning, and ready to give the Austin’s equally old engine a rest as well.
As evening wears on, the other difference becomes obvious. In New Orleans, midnight on Fat Tuesday brings lines of NOPD horse police closing down the party, signaling the beginning of lent and the successful end of another Mardi Gras season. In Detroit posters list the hours of the cruise as “Dawn to ?” or “9 AM to 10 PM or Whenever.” Different jurisdictions start sending out hints at different times, but generally the drivers get tired and head for home, then the families spontaneously drift away as there are no more cruising to watch. In Madison Heights the police tell everyone to leave and get off the streets shortly after dark. In Pontiac, the tuner cars freely drive around, burning out, having impromptu races and clogging the parking lots until the wee hours of the morning. By Sunday, more cars are on the hot rods, classic cars, and tuners drive on the interstate heading home than cruise up Woodward. It’s all over until next year.

Automotive News and the Detroit Free Press reported well over a million people descended on the greater Detroit area to celebrate. From all over the country and the world, tens of thousands of vehicles participated. The greatest free automotive show on Earth. 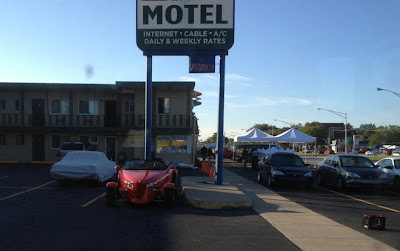