The Chicago Auto Show is the largest consumer auto show in North America. Detroit, New York and even LA are more important to the press, but the Chicago show is for car buyers. One of the indicators that this is a show for buyers more than for the press are the two indoor driving tracks: one for Chrysler/Dodge and the other for Toyota trucks. To keep certain people (Jesse) from driving off the track and rampaging through the convention center, a professional driver handles the wheel while you take in the sights of the McCormick Place from the passenger seat.

The Toyota track was composed of tons of dirt and replicated an aggressive off-road experience.

Similar to last year, when Toyota introduced the 2014 Tundra here, trucks were the focus of the production vehicles premiered at the 2014 Chicago Auto Show.

This vehicle, a rebadged Nissan NV200, gives GM a U.S. entry into the compact work van market, one that has exploded since Ford introduced the Transit Connect. It will only offer a 2.0 4 cylinder pushing the front wheels through a CVT (continuously variable transaxle, belt and pulley transmission). Payloads of up to 1500 pounds will be doable, but the City Express will not be rated to tow. Also, 4'x8' loads will not fit flat with the cargo doors closed. The cargo area is over 4-feet wide, but well short of eight feet long. This all leads to a tight 36.7-foot turning diameter and a 24 city/25 highway fuel mileage rating. (Concentrate on the city figure, which will be the important one for most users.) Competitors: Ford Transit Connect, Ram Promaster City (future), Ram Cargo Van (Caravan cargo), Nissan NV200.

Larger brakes, stronger frames and the looks of the new 2014 1500 models, the GM HD pickups don't get any new engines. Well, they do get a new fuel: all models now offer CNG (compressed natural gas) duel-fuel engines that can burn North Dakota's largest export or switch back to regular gas. This feature will only be interesting to fleet operators and a few fanatics. The new HD pickups get all of the updates than the 2014 1500 pickups got, including available Lane Departure Warning and Collision Warning systems. 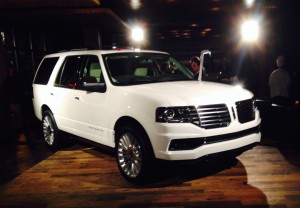 Lincoln went the extra mile introducing the 2015 Navigator refresh, hosting the press at a free buffet and open bar in an upscale restaurant, with the Navigator parked in between the barbecue shrimp and the bar. It's 5.4 V8 is being replaced with an ECOBoost V6. The twin turbocharged 3.5 promises at least 370 horsepower and improved fuel economy. It's a proven power plant, being offered in the F-150 for 4 years. It will also offer a continuously controlled suspension to help make the ride smoother and the cornering sharper. It also will have electrically boosted power steering.

Nissan's announcements at the show included a diesel-powered Frontier pickup prototype. The Cummins-built 2.8 four-cylinder is not guaranteed, especially in the U.S., but seems likely, especially with the previous announcement that the new Titan full-size would use a 5-liter V8 turbo diesel by Cummins.

Toyota didn't introduce a new truck like they did last year, but an entire line of truck accessories and performance parts under the TRD Pro name. Including suspension parts, wheels, skid-plates, exhaust parts and general accessories, they're all designed to make off-road more fun and improve sales at the parts counter in your local Toyota dealership.

The other big trend at the Chicago Auto Show last month was the continuation of the race to diesel engines. In addition to the diesel Nissan Frontier,

BMW showed the 740Ld xDrive. To the uninitiated (non-Beemerheads), it looked like my keyboard just malfunctioned, so I'll translate: "7" indicates the 7-Series, BMW's largest and most luxurious sedan; "40" this number used to indicate engine size. With turbochargers, etc., this is no longer strictly the case. Here it means a 3.0 liter inline six cylinder engine; "L" the 7-Series comes in two sizes, regular (no suffix) and long wheelbase ("L"), where the added space goes into an office-like back seat; "d" is the money-shot, indicating a 255-horsepower turbocharged diesel (even more confusing: this same exact engine is designated 35d in the 5 Series); and finally "xDrive," BMW's designation for all-wheel-drive. This wasn't a big introduction, seeing as the car and the engine were previously available, just not together. 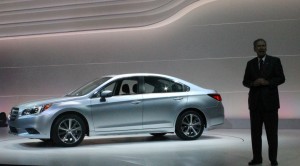 The 2015 Subaru Legacy saw its world debut in Chicago. This mild redesign seems very conservative, but that's only natural, since Subaru has seen such sales success lately they have to be wary of going off-track. The most major mechanical change is the replacement of the 5-speed automatic for the 6-cylinder engine with a CVT (continuously variable transmission), that uses steel belts and pulleys to change drive ratios continuously for better performance and fuel economy. The 2.5 flat-four already uses a CVT. Fuel economy should improve, but is not repotted, yet. The way they introduced the Legacy was one of the more "interesting" bits of showmanship at the Chicago Show; it began with this big box: 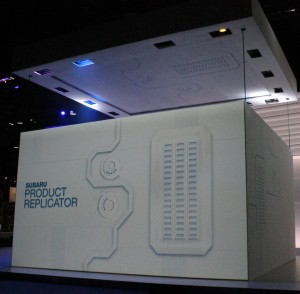