There was a thin layer of snow on the cars parked on 11th Avenue in front of the Jacob K. Javits Center, home of the New York Auto Show, but inside it was bustling with crowds of press running from one important announcement to the next. The show is so large, we don't even get to GM in the North Hall until the second day (no press conferences); to go from one end to the other, golf carts are queued up to carry the weary press. 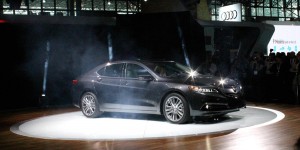 This was Acura's most important debut in years. Replacing the TSX compact sedan and the TL sport sedan, the TLX takes the wheelbase of the old TL, but is shortened by four inches. It will be offered with 4-cylinder and V6 engines; front and all-wheel-drive. The three main variations are:

Many journalists have said that the TLX is Acura's last chance to save their sedan business. It may be overstated, but Acura has a ways to go to get back to their peak days of the Legend and Integra. It's been a rough ride: anyone remember the Vigor? The TLX seems focused; it's shorter than the TL but still has the wheelbase and interior room. Replacing the TL and the TSX makes the lineup simpler and a lot less confusing. Not will miss the TSX Sport Wagon after all. Four-wheel steering may seem gimmicky, but it plays on the strengths of the Honda engineering staff that first tried this on the 1988 Prelude. Honda has a way of taking something highly technical and unique and turning it into a serious advantage (VTEC, CVCC, aluminum engines, etc.). The top-of-the-line TLX SH-AWD will not offer it, probably due to space constraints, but the SH-AWD system uses its variably locking differentials to offer similar control, though without the shorter turning diameter. 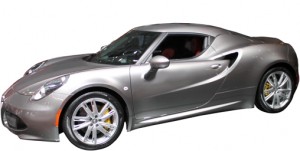 What Alfa fans have been waiting over two decades for has finally arrived. The Alfa Romeo 4C sports car will go on sale late this Summer in a "Launch Edition" with regular sales starting a few months later. The Launch Edition will only be available in two colors: red or white. It will have all features offered as optional standard. This 237 horsepower turbocharged sports car, with a mid-engine design and two seats will be bare bones. Think of it as an Italian Viper. No power steering, fixed intermittent wipers, no heated seats, power seats or auto dimming mirrors.  In Italy (not in the U.S.) air conditioning and a radio are options. After adding U.S. spec bumpers, airbags and side protection, there's no telling how much weight will be added, but in Italian form it weighs as little as 2600 pounds.That's 700 pounds less than a Corvette. 300 pounds less than a Boxster. 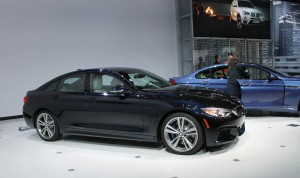 I am getting sick and tired of "coupes" with four doors! Enough! I mean it's great that BMW can launch 6 body varieties of the new 3 Series in the U.S. (half of them are called 4 Series). It's a testament to flexible manufacturing, but let's rethink some of these names. How about we call this car the 3 Series Gran Sedan? And how exactly is the 4 Series Gran Coupe different from the 3 Series Gran Turismo? It will come in the usual varieties: 428i with a 240 horsepower 2.0 4-cylinder turbo; 435i with a 300 horsepower 3.0 6-cylinder turbo; and eventually an M4 Gran Coupe with 425 horsepower in its new turbo 3.0 6-cylinder. (That would make it different than the 3 Series Gran Turismo.)

World debut. Combine the M4 coupe and the 4 Series convertible.

North American debut of revised model. Will offer xDrive28d diesel powered version. Optional Smart Opener for the tailgate will work similar to Ford Escape, and open the tailgate for those with the remote in their pocket without having to press a button. 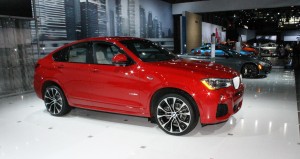 Here we go again! It's the BMW X4 Sport Utility Coupe... with 5 doors! The difference between this and the X3 are a much faster back with much less cargo room and a lower height, including less ground clearance. Also, the same basic variations: xDrive28i and xDrive35i. No M or diesel, at least yet.

Here is what puts the "Show" in the New York Auto Show. At major introductions, Chrysler never disappoints. First a few announcements, then the screen comes alive with Dodge's new TV ad, chock full of centenarians with attitude (much like the 100-year-old Dodge brand we are led to believe). Now comes the new sheet-metal. As we sit in the audience and wait, stereo sounds of V8 engines pound our ears. But as we begin to smell more and more exhaust fumes, we realize that these aren't being electronically reproduced! headlights flash through the mesh gates at the sides of the stage. 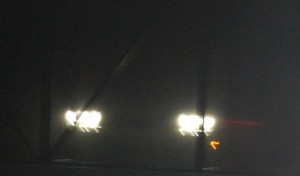 Finally, the left gate rolls open and an electric green Dodge Challenger roars out, followed by a steely gray one from the right side. 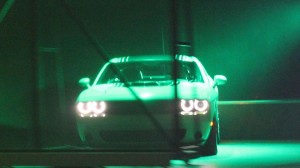 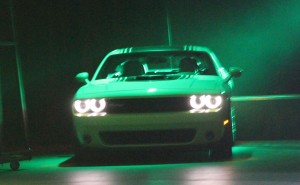 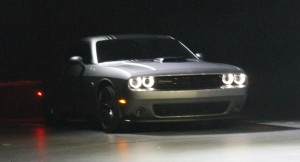 The new look is obviously evolutionary. Except possibly at the taillights, no one will do a double-take seeing these at a traffic light, but the look is good: clean, crisp, modern, MEAN! Those taillights are really good!

Mechanical changes are moderate. The ZF 8-speed automatic replaces the old Mercedes 5-speed across the board. The new Scat Pack 392 Hemi replaces the SRT-8 392 Challenger, and raises the horsepower by about 15 due to the functional "shaker" hood scoop. We are told that the SRT will come back, but with the 392 Hemi now a regular production model what engine will it feature? Word is, a supercharged Hemi with as much as 700 horsepower is on the way, called "Hellcat." Safety Features. Adaptive cruise control, electronic blind-spot monitoring, rear cross-path detection and forward collision warning are now all optional.

As the new Challengers rotate on their turn-tables on the stage, the show's not over... high above the stage, headlights blink on and the sound of a thundering V8 starts again. Then the center doors open, to reveal the distinctive new front end of the 2015 Charger. 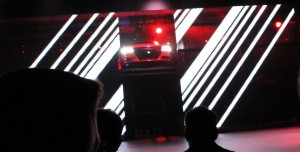 It's obviously derivative of the Dodge Dart, showing Dodge's intent to create a familial appearance (new Challenger excepted) between its fewer remaining models. Slowly, the new Charger is lowered unto the stage, where it zooms out between the Challengers to take its place. 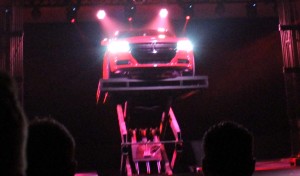 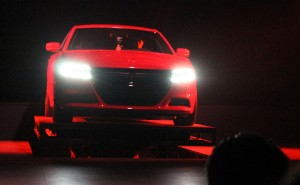 The Charger's 2011 refresh is mostly kept in place: it was gorgeous, after all, but the new grill is clearly influenced by the Dodge Dart. Some have said it doesn't work on a full-size car, but I think that is only if you look at it next to the Dart. By itself, the new Charger grill works. The Charger also will see the 8-speed automatic fully replace the 5-speed, now. A more robust forward collision system, lane departure warning with lane keep-assist (electric power steering has creepy possible uses), and other fancy electronic aids are sprinkled on heavily.