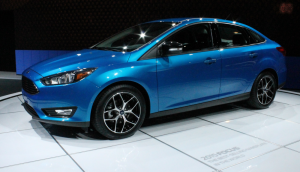 2015 Ford Focus[/caption] The three-cylinder turbo ECOBoost engine will be an option, following its introduction in the 2014 Fiesta (late option). This 1.0 liter 123-horsepower engine will only be offered with a six-speed manual. The standard 2.0 4-cylinder is unchanged. The interior is redone. A backup camera is standard. Lane departure warning and blind spot monitoring systems will be offered. 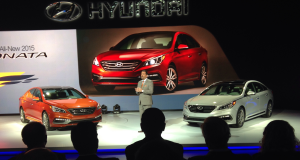 The Hyundai Sonata separated itself from the pact with its "Fluidic Sculpture" styling in 2010; for the 2015 model year Hyundai states that to build on that successful formula with "Fluidic Sculpture 2.0." The grille is larger, the lines are crisper, but overall this is a mid-cycle refresh, and the car seems more conservative-looking, though the coefficient of drag (wind resistance) is a touch better. The engines and transmissions are carried over from the last model (the 2015 Hybrid is not announced, yet, but likely will carry over mechanically as well). The 2.0 Turbo engine option is de-rated to 245 horsepower (down from 274), but it is likely only a paper detuning, as tests of older models seemed to suggest the engine was over-rated. The 2.5 base engine is now rated at only 185 horsepower, down from 190 (192 on SE). New for the 2.0 Turbo are larger brakes: 12.6 inches in the front to help slow down the faster car over the 11.8" front brakes carried over from last year on models with the base engine. What isn't carry-over is a host of new safety improvements. Underneath the more sedate sheet-metal is a lot more high-strength steel and a toughened passenger compartment safety box. A new driver's knee airbag will better keep you in place in a severe accident and protect your legs. Forward Collision Warning (to warn you to brake if a crash is imminent), Lane Departure Warning (an annoying feature to beep at you if you go over the lane markings without signaling), Rear Cross Traffic Alert (warns you if a car is coming as you back out) join last year's Blind Spot Warning as options. Like last year, the 2015 Sonata is an EPA-rated "Large" car in a field that is mostly mid-sized. It has more passenger space and trunk volume than the Accord, Passat, Fusion, Camry or Altima. It has a lot more passenger space than the Malibu, but their trunks are the same size. More premium options are also available, including Smart Cruise Control that will match your speed to the car in front down to a full stop in bad traffic. Optional High Beam Assist will keep your brights on until cameras detect oncoming traffic or cars in front that would get blinded, then automatically changes to low beams. Funnest of all is the available Smart Trunk, which allows a driver to walk up behind the car with the key in their pocket, and the trunk will open after a short pause. (Hilarity will ensue as thousands of drivers curse and close the trunk when they pause to look at a hot girl/guy jog by.) An air conditioned front passenger seat is now added when you get the Limited model: last year only the driver's butt was cooled. 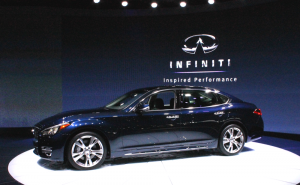 The all-new Infiniti Q70 flagship was revealed at the New York Auto Show. Not to be confused with the Q70 that came into showrooms a few months ago, which was just a re-named M Series. To show they're serious, the new Q70 will come in standard size and stretch versions (pictured above) with an extra 5.9 inches. Only the stretch will offer heated rear seats. Strange, as a Hyundai Elantra Limited has them. Forward Emergency Braking replaced by  Predictive Forward Collision Warning, with the latter being able to see vehicles in front of the one immediately in front and react accordingly. A Backup Collision Intervention System is also available, which will stop the vehicle if it is about to back into something or someone. The new Q70 will also offer the Around View Monitor, previously introduced on Infiniti's sport utilities and the Q50 sedan. Using cameras mounted under the side view mirrors and elsewhere, it stitches together a bird's-eye view to assist in tight quarters. As with the Q50, none of the powertrain choices change: Q70 3.7, Q70 5.6 and Q70 Hybrid offer the same ingredients as the previous model. 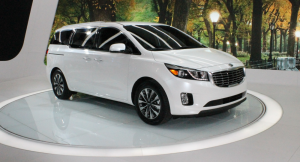 Even with GM and Ford abandoning this aging niche, the Sedona has an uphill fight. The newly restyled 2015 might make a go of it. At its peak, the Sedona sold under 50,000 units, while the Odyssey and Town & Country were each well over 100,000. Last year, the Sedona sold about 7000 units, while the Honda and Chryslers were still well over 100,000. The 2015 Sedona is completely new, a long-overdue reboot since the last one in 2006. Its style grabs you, without being off-putting at all. It does steal the bumped up third-row window from the Honda Odyssey, but nobody will confuse the two. Kia will offer an eight-passenger version, as well as the seven-passenger already available. A smaller 3.3 V6 will provide a little more horsepower and torque, thanks to direct fuel injection. It should get better fuel mileage, but numbers aren't available, yet. 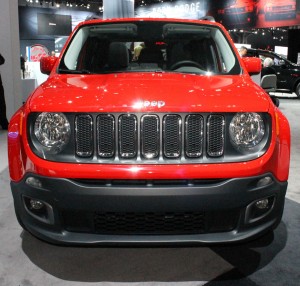 Over 70 years after Jeeps first went to Italy (under not so good circumstances) a new Jeep is now coming from Italy. The Renegade, based on the same platform as the Fiat 500L, is the first Jeep not to be built at all in Toledo or Detroit. Utilizing a 1.4 turbo four cylinder engine and a six-speed manual or a 2.4 four cylinder and a nine-speed automatic, it will offer 4x4 systems meant for a light dusting of snow or a full-on Rubicon trail. The latter, courtesy of Trailhawk models, will offer up to 8.7 inches of ground clearance, 19 inches of water fording depth and a 20:1 crawling gear ratio, for very slow maneuvers over tough obstacles. [caption id="attachment_152" align="aligncenter" width="300"] 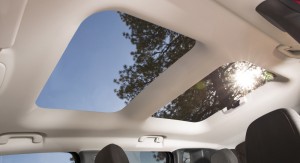 ©2014 Fiat/Chrysler[/caption] The Jeep Wrangler, with its canvas top, removable doors and flooding windshield is the world's most open-air vehicle, so the Renegade had to step up; My Sky: two different sunroof systems with removable, stowable panels is offered. Stay tuned for part III.