With the constant debates, assertions and estimations revolving around our supply of oil— that inky, slick liquid we drill for, deep beneath, then use to make all sorts of things: plastics and rubbers, lubricants and even very liquid that moves our society— it's nearly impossible for anyone to not consider a post-petroleum world and have a number of worries and concerns. When will ‘alter-energy’ era arrive? What preparations will we have made by then? How will the industries centered entirely, or near to, around petroleum change, if not wither and die? Will EV's be the future or will they give way to some other system of mobility? The questions are nearly endless. For many, it's a scary thought wrought with high levels of civil unrest. [caption id="attachment_133" align="aligncenter" width="300"] 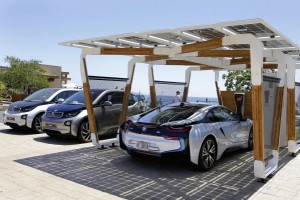 Prototype solar carport for BMW i8 plug-in hybrid[/caption] For others, the allegedly steep slope of use we're on will give cause and way to a dramatic shift in first world paradigms putting us fully in an 'Orwellian' state of societal existence. Still others have no concerns, having full faith in humanity's peculiar ability to escape pending doom nearly unscathed thanks, in art, to our tendency to adapt, almost overnight, when fully confronted with the necessity, even when counter to social obstacles that have long been our mores. Thanks, however, to the increase in engineering and research into EV product lines, from concept to production, and ventures into yet other energy sources, as well as the ever-increasing awareness of alternatives for most any petroleum product or other limited raw material, the fears and concerns of the last 4 decades have been quelled in some variance and degree regarding sustainability of energy. With just a knack for using Google, anyone can see that the post-petroleum world, while different in many ways, may not be so devastating. If led by great minds and the right motivation, it is sure to be as incredible as was our step from agrarian to industrial. Thinking about this, I've concluded that I am not a huge fan of the impending move to alternative energy, at least in the automotive world. It isn’t that I have some belief that we can’t better our systems and technology and place in the flow chart of humanity’s progress. 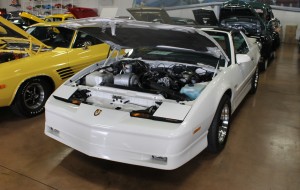 It’s an arbitrary resistance founded in my romanticizing the 'purity' of a roaring engine and the smell of burned and unburned hydrocarbons mixing together and pouring out as the throttle is thrown to the floor and the redline is hit almost immediately. Suffice to say, I like my gasoline engines. This notion is then supplemented with my feeling of being left behind in the automotive world, as a tech, becoming obsolete before I’ve even bought my first roadster to replace my hair. Just for the record, I’m not balding, it was allegorical. The latest pushes into hybrids and EV’s and use of supplemental sensors and extensive, complex fuel mapping controlled digitally rather than mechanically leaves me feeling artificially aged, a dinosaur before my time. An automotive world fossil, if you will. Being not even a couple years over 30 and, already, two decades of, turning bolts seem obsolete in any way beyond changing out filters and fluids. The days of using a ratchet, wrench or some kind of driver to install a CAI are soon to be past for anyone not sporting cars from my teens or older. Even tire rotations have become a task requiring expensive, exclusive tools that make it too expensive to DIY and leaving no profit for many smaller shops putting that task in the hands of dealers and chain and mega-chain, ‘fast-food’ lube shops. While these new systems and sensors are great for what they are supposed to do in making drivers more ‘situational’ aware. They make for more efficient vehicles that can respond to and even adjust to correct slight problems for a time. Yet, to me, they are also a tax on the ego of the shade tree mechanic and, as arbitrary as that may be, I still wish to be back in the 90’s, adjusting the F/A mix screw to try and tweak every inch of power out of an engine without sloping over to too lean. Does that mean that I think the paradigm of a post-petroleum world is the wrong way, unwarranted or somehow foolish? Am I trying to promote staying with what we know works rather than forge ahead into new, and sometimes old, lands and ways of thinking? If it ain’t broke, don’t fix it, right? Absolutely not. Let’s be realistic. You can play it up or play it down, in the end, anyone who has spent even a moment thinking about the sustainability of our systems, societies and ways of life has to admit, sooner or later, before or after a perceived rapture or Armageddon or what have you, it will not be sustainable. In fact, it is not sustainable, we have just become quite adept at adjusting to accommodate the side effects we've already suffered. Regardless of any opinions or statistical findings in favor of one side or the other, the reality is that we can't try to keep our ways the same. No matter how badly I would miss the things I love about engines today and before, there are too many reasons to move on. First, it's natural. It's called progression. 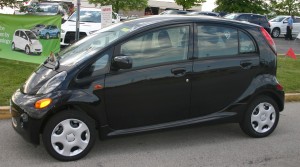 We hope for positive progression, movement towards sustainability. Nevertheless, for better or worse, we are programmed to not sit still. Look at any period in history where society didn't move. It got pretty bad. Humanity flourishes most when it has the least stability and the most autonomy to find the next step. It is the upheavals of the enlightenment and renaissance, the industrial age to now, the civil movements, et cetera, coupled with autonomy; a way men like Galileo and Franklin and so many others used to make their discoveries without worry of being blasphemous, insane or any other adjective often applied to future thinking persons; that acted as the soil many, if not all, great minds have used to flourish, to discover great innovations in every realm and helped fuel the progress of man's movement from stone to steel, steam to combustion, mechanical to electronic. Second, it's needed. Nature always seeks balance and all systems in nature require progress through some medium of growth or adaptation, et cetera. No progress leads to stagnation. Stagnation is decay and degradation. Movement, progress of some sort is needed. For positive progress, balance is needed. Balance inevitably blazes the trail to the sustainable and efficient; seeks null or minimal waste, taking in just enough and utilizing any leftover to aid in the efficient and sustainable functions of a balanced system. We need to progress and we need to move towards balance. Our system is not sustainable. It is not efficient. This has been and still is incredibly evident in the automotive world. No matter if we'll run out of oil next month, next year or just before the expansion of the sun. Our system, the system of humanity, is not running at maximum balanced sustainability and efficiency in so many ways. If we hope to continue moving forward to higher and loftier places and if we wish to be the best and most of what we can be, we must become sustainable and balanced and creating a sustainable system of mobility is a great start. We moved from steam to combustion, combustion is now giving way to "electro-mechanical" and that may give way to ? We need to move from using limited resources to renewable where we can; minimize the use of limited resources to ‘just enough’ for achieving sustainable progress during the interim while we look for sustainable replacements. Third, why not? That's half the attitude that created and discovered the things and the world around us. They say necessity is the mother of invention, I say rebelliousness is the father, or, at least, an influential first cousin. Without the attitude of why not, ignoring the popular opinion or nay-sayers or even the edicts of prohibition, we wouldn't have the knowledge, the technological advancements, the everyday innovations that changed the world over such as autonomously-powered vehicles. It is the question, why not, that led to explorers discovering distant lands and it is that question that should be equal to or second only to what is needed and followed by how. Years from now, I'll sit on my porch, just waiting for some kid to lay a foot in my yard so I can yell at him. I'll bemoan the travesty that is the driveways full of EV's that surround me, can't hear them, they're like big metal ninjas, just waiting to sneak up and run me over. However, despite my nostalgia and blows to my ego, deep down, I’m all for where I see the industry going and I’ll just hope that the motivations begin with the lofty with profit and regulation being tertiary in the minds of those bringing the post-petroleum age to life. In summation, for now, at least, I am saddened at the prospect of living in a world with no more fume filled tracks and garages, no more engines screaming, no more contained explosions pushing over a ton of car down a path of tar and rock. However, I am elated that people are coming to realize that sustainability is more important than tradition; that the ‘if it works, don't fix it’ mentality is inherently flawed. We can’t let tradition stop us from being more than we are now. There is a difference between reverence for the ways that led to now and allowing stagnation to take hold for fear of insulting those who refuse to admit that traditions become obsolete in the face of an ever-changing system. We can’t accept that if something works, it should be left alone. Had we done that, what would we have today? Steam power worked. Muskets worked. Hand-set printing presses and the first PC and the first telephone all worked. Had there not been those who wanted to fix what already worked, this world would be very Steam-punk and incredibly alien to what we have today. Progress, the betterment of our systems and ourselves requires constant modification to what works now in order to see that it works tomorrow and is sustainable to the end. -JP-