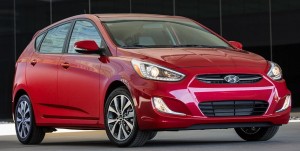 The 5-Door and 4-Door Accent receive styling updates to the front and taillights. It sports a new grille, headlights, wheels and taillights. The Accent 5-Door SE will now be called the Sport. An exterior temperature gauge is now standard.

The entry-luxury sedan that was brand new for 2012 receives a mid-cycle refresh for the 2015 model year. The outside gets a new grill, front and rear bumpers, and wheels. Along with the new look, the Azera gets a raft of new standard safety equipment: blind-spot detection, rear cross-path traffic warning, and lane-change assist are standard on all models. Limited trims also get lane departure warning, forward collision warning and automatic high-beams. Apple Eyes-Free Siri integration makes it easier to use your iPhone without taking your eyes off the road. Power folding mirrors, ventilated front seats, heated rear seats, navigation system, power tilt/telescoping steering wheel, driver's seat, mirrors, and wheel memory are now standard on the base model in addition to the Limited. Power rear sunshade, manual rear side window sunshades, and rear parking assist sonar system is now standard on Limited; a rearview camera is still standard on all models. Standard illuminated sill plates are a nice, new luxury touch. The base price is up $3000, to $34,895. Azera Limited is up $3450, to $39095. 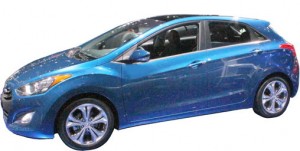 A very brief run with almost no changes before a revised 2016 model is available this Spring. Heated seats, visor extensions and a driver's blind spot mirror are all now standard. Blue Link telematics, used to control your smartphone from the dash or call for emergency services, is now a cost option. 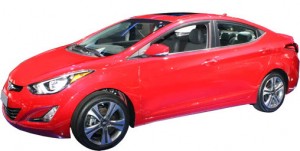 BlueLink telematics are now optional on Sport (previously only standard on Limited. BlueLink allows for remote unlocking of doors and stolen vehicle tracking as well as emergency notification in case of airbag deployment to send rescue. SE models no longer offer heated front seats; they are standard on Sport and Limited. The Style Package offers projector headlights (standard on Limited and Sport) on SE models. 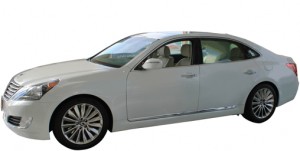 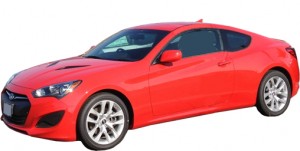 The 2015 Genesis Coupe is simplified, with the 2.0 Turbo base motor no longer available, only the 348 horsepower V6 remains. The Grand Touring model is gone, leaving only the new Base model, the R-Spec and the Ultimate. 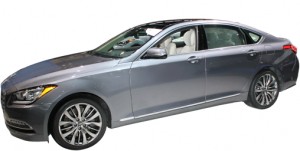 The 2015 Genesis Sedan has been out since the Spring. Boasting a longer wheelbase, the new Genesis Sedan also offers all-wheel drive now, but only with the V6 engine. The same two engines: 3.8 V6 and 5.0 V8 return, their horsepower slightly reduced. (V6: 311 HP, 293 lb.-ft.; V8: 420 HP, 383 lb.-ft.) A number of high-tech features are added, including a hands-free trunk release. Unlike competitors' systems from Ford and BMW, the Genesis doesn't require any foot kicking or waving: simply wait by the trunk for a few seconds with the smart key in your pocket and the trunk opens. Blind Spot Warning, Rear Crosspatch Warning and Frontal Collision Warning with Automatic Emergency Braking have all been added to the 2015 as options. The Lane Departure Warning system returns from last year. This entire collection of protections is called the Sensory Surround™ Technologies. 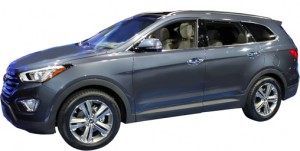 The Santa Fe now has daytime running lights. A driver's side blind-spot convex mirror is also standard. Rear Cross-traffic warning has been added to the blind-spot monitoring option. A Hands-Free Smart Liftgate with Auto Open is now optional. Just stand by the liftgate while in possession of the Proximity Key and it opens by itself, making it easier to load without putting packages on the ground. Steering feel is refined by changes to the electronics in the steering system. An automatic front passenger window joins the driver's in raising or lowering all the way with one push or pull of the switch. Fog lights are now standard. 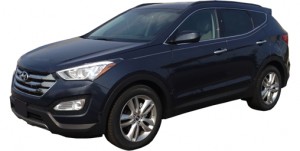 A blind-spot mirror on the driver's side is now standard, as are daytime running lights. Cross Traffic Alert, which makes backing out of parking spots more safe, is now included with the optional Blind Spot Detection system. Steering feel is refined by changes to the electronics in the steering system. A power Hands-Free Smart Liftgate with Auto Open is now offered, optional on base models and standard on the 2.0T. Just stand by the liftgate while in possession of the Proximity Key and it opens by itself, making it easier to load without putting packages on the ground. A power lift gate wasn't available on the Santa Fe Sport last year; it can be operated in the traditional manner with the remote or a button inside the vehicle. 2.0T offers Xenon HID headlights in the Ultimate Package. 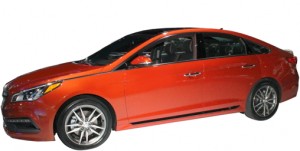 All-new for 2015, the Sonata gains a new high-mileage variant with a 1.6 turbocharged direct injected four-cylinder engine and a 7-speed dual clutch transmission. The other engines are mostly unchanged, but the 2.0 Turbo loses almost 30 horsepower (on paper), down to 245. The exterior styling is a lot more conservative than the devious model, indicating Hyundai is ready to take more market share and no longer just needs attention. The Sonata offers the hands-free trunk opening that was introduced on the Genesis sedan: wait by the trunk with the smart key in your pocket and the trunk will pop open. High-strength steel and chassis improvements got the new Sonata an "Acceptable" score in the Insurance Institute for Highway Safety Small Offset Frontal Crash Test, which gets the Sonata a "Top Pick Plus" when equipped with is new optional Collision Warning system (Limited/Sport). A Lane Departure and a rear cross-path warning are now offered. 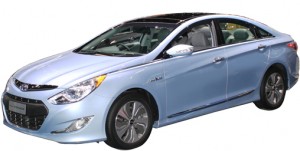 Unlike the regular Sonata, the 2015 Sonata Hybrid is a full carryover. No changes from 2014 model. With a new Eco model, it is unclear whether a successor based on the new chassis will be coming or if the hybrid is over. Probably the former.

Backup camera is now an option on the entry-level GLS trim, along with a power driver's seat, power driver's lumbar adjustment, and automatic headlights, as part of the Popular Equipment Package. 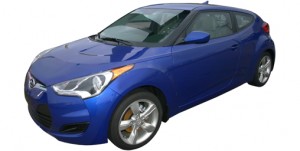