Acura has gone on a wild tear, updating their entire product line-up, and soon returning the NSX super-car to us. Even cars only two-years new aren't safe, as the MDX (redesigned for 2014) and the ILX (new model for 2014) get significant engineering changes. 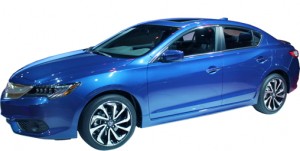 The ILX has been found wanting, but not for long. Acura has quickly addressed the short-comings of their new entry-level model. Short of renaming it the Integra and putting the manual back, there's not much left to do. The previous anemic 2.0-liter four-cylinder engine, lifted from the lowly Civic has been replaced with the direct fuel-injected 2.4-liter from the TLX, and coming along for the ride is the TLX's eight-speed automatic, a dual-clutch sequential gearbox that also has a torque-converter, making it efficient, fast and smooth. Even with all the extra power, fuel mileage increases 1 MPG city and highway (25 city/36 highway). Sadly, the six-speed manual is no longer offered. Larger brakes are part of the package: 12.3 inches in front and 11.1 inches in back, up from 11.8"/10.2" on the 2.4L 2015 model, way up from the 2.0L. Underneath the skin, the ILX has a stiffer, stronger chassis and body to help improve handling, ride and crash safety. A memory seat (2 settings) is now available as part of the Premium Package, as is a 4-way power passenger seat. The power driver's seat is now standard across the board. Adaptive cruise control is now offered, along with a slew of electronic safety nannies: Lane Departure Warning, Blind Spot Warning, Cross-Path Warning, Road Departure Mitigation, Collision Warning and a Collision Mitigation Braking System. AcuraLink is now offered, with telematics features such as emergency services notification in case of an airbag deployment, remote door unlocking, and stolen vehicle recovery. LED headlights replace last-year's halogen or optional xenon units. Comprised of ten separate units (six for low-beams and four for high), they are the new headlamp look for Acura, mirroring the MDX, RLX, TLX and NSX. Surprisingly they have no adaptive cornering functions. Finally, an A-SPEC Package lets people know your sporty: larger 225/40R18 tires (not before offered on the ILX) complement suede seats, fog lights and a rear spoiler. Red gauge lights and an ebony headliner complete the package. Acura giveth; Acura taketh-away: Homelink is now optional, part of the Premium or Technology Packages. Six-speed manual no longer offered. 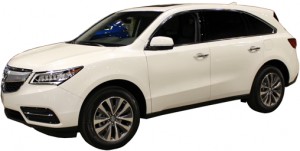 Fresh from a remake in 2014, the MDX gets a new nine-speed transmission and light changes to its grill, headlights and bumpers for 2016. An engine start/stop system has been added as part of the Advance package, and it improves city fuel mileage by one MPG. 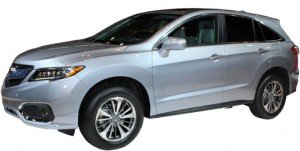 The RDX gets a thorough redesign for 2016. New sheet metal, bumpers, grill and lights. The 2016 RDX will get LED headlights to match the rest of the lineup. The 3.5 V6 gets more powerful and gains 1 MPG EPA highway fuel mileage. The chassis has been tweaked to further improve federal and IIHS crash test results. Heat and air-conditioning vents have been added to the back seat and the power tailgate is now standard. Air-conditioned front seat are now offered as part of the Advance Package. 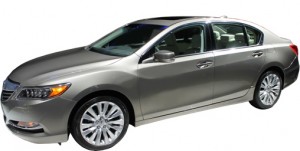 Cross Traffic Monitor and a Surround View Camera System have both been added as available safety features. The navigation system and AcuraLink are now standard. The 19" wheels are also now standard; the 18" wheels are no longer offered. Remote start and a heated steering wheel are now included with the Advance package.