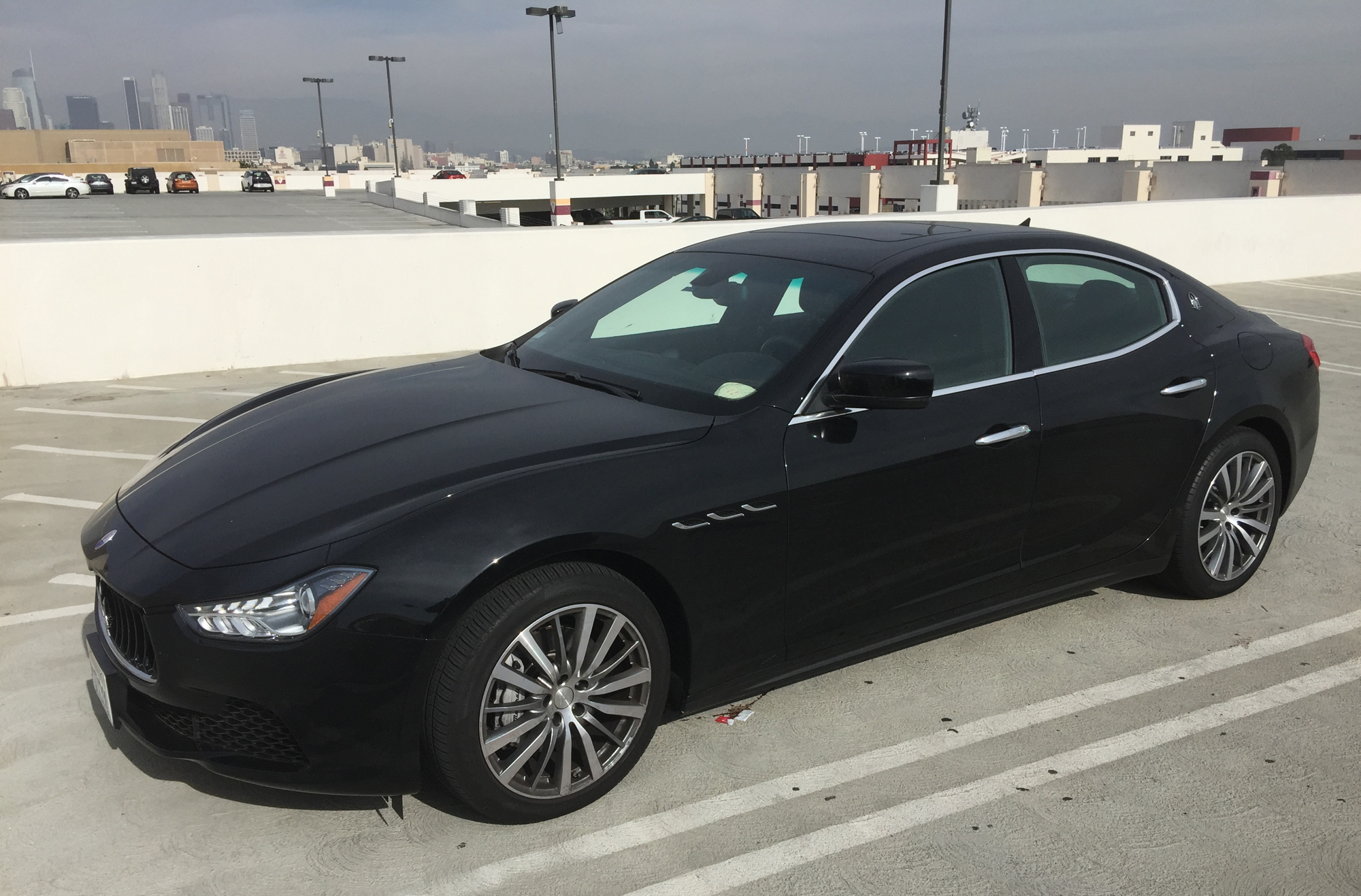 Or, How We Tore Around Like Idiots Without Spending TOO Much Money!

We started online, looking at car rentals for our time at the LA Auto Show, where I stumbled upon a peer to peer car rental app: TURO. While comparing Enterprise and Budget ($199/day for a Grand Cherokee) I saw I could rent a Maserati Ghibli for less on TURO.

As if paying less than the cost of a Grand Cherokee weren’t enough, TURO, The P-2-P Car rental service we were using, has their own valet that brought the car to us. We picked up the Ghibli at 5:00 PM in a nearby hotel parking lot. That is, we would have, but the owner was caught in traffic. This would be a sign of things to com.

When the valet did arrive, he handled scanning my driver’s license and inspected the car. The valet’s overall demeanor was very friendly and used his phone to take pictures of the scratches on one side and the bad road rash on one of the wheels. After we fielded some questions for the owner on the best luxury car to buy, rent for a few years, and then resell, not a Maserati if you were wondering, we took off for our hotel.

Second Impressions: Loud. Fast. Great handling. Nice seats. We shot through traffic, at least as much as one can at 5:30 PM in LA traffic going from the airport to downtown. Its great fun to stomp the gas, twist the wheel, and shoot into an adjacent lane that allows me a few hundred feet of movement. (I strongly disagree with this statement. -My Sidekick) Sometimes a lane is inexplicably empty for several hundred yards and I must snarl down it as quickly as I can only to find out why it was empty and be forced to jump back into the other lane having gained on my destination.

Third impression: This car has more turbo lag than a mid-eighties Chrysler turbo automatic. At one traffic light I floor it… three seconds after I ooze away from the intersection, the Maserati growls, barks and lunges forward like a mastiff that’s just smelled the mailman on the next block. I try pressing the “S” Button which issues a “Sport Mode” message in the center of the gauge cluster and seems to improve the lag marginally, but now the car bucks, lunges and stays in a lower gear most of the time. I eventually get very good at flooring it about two seconds before I need maximum acceleration, unfortunately this doesn’t work with stoplights and I really don’t want to torque brake somebody else’s car. It does, however, make for incredibly amusing corners. As I floored it to go around and the car docilely turns in and then fishtails slightly on the exit as the engine finally surges to life. This trick just did not get old.

The next day, after taking the Maserati a couple of miles from the hotel to the convention center to register for the LA Auto Show (see 2016 LA Auto Show), my sidekick and I decided (I decided nothing! -Sidekick) that we should take a longer drive and get the feel of LA and the Ghibli on the open road. After briefly determining that if the Maserati Nav system knew where Pacific Coast Highway was, it wasn’t going to tell us, My Sidekick looked it up on his phone and we started to head in the direction.

We closed in on the PCH, using mostly surface streets, when I decided we should gas up. Luck was with us and we paid less than $3.00/gallon for premium. Three modern niceties we often overlook made it simpler to refuel: a glance at the gas gauge revealed an arrow pointing to the passenger side of the car, so I maneuvered to place the Maserati to the left of a free pump. The Ghibli’s locking fuel door automatically unlocked when we unlocked the car. Finally, the Ghibli is cap-less, so I just had to insert the nozzle and start pumping.

Full of 93-octane, we spun out of the station, headed towards PCH. Ever been on the PCH on a weekday at 6:00 PM? Yeah, loads of traffic. Not creeping, bumper-to-bumper traffic, but congested, tight, “we aren’t seeing what this Maserati can really do” traffic. By now I’ve gotten the turbo lag subconsciously compensated for in my brain, so I give it a good old CarChat try: pointing, squeezing, anticipating holes in traffic, staying in a right-turn-only lane until the last second, trying to drive a car with an on-off switch throttle smoothly and evenly.

Another shortcoming (for regular people) rears up: this car is as stereotypically Italian as a swarthy man carrying a sack of garlic bulbs. There is very poor rear visibility and almost no side visibility. The automatic dimming mirrors are either stuck in “dim” or their surface is just too dark after Sunset in Southern California. I compensate the only way I can: changing lanes with the gas pedal. Instead of looking or signaling, I just floored it for 2 1/2 seconds then change lanes. This amused me to no end, although my sidekick looked ill the majority of the time. This worked quite well as I avoided wrecking it the entire 4 days we got to drive it. I did however pick up a toll violation somehow. (With their cameras, changing undecipherable lane markings, and ambiguous signage, it is almost impossible to figure out if you’re violating something in California.) The TURO owner sends me a bill for the violation a couple of weeks after we get back.

Overall, the Ghibli is great fun. As a daily driver it would probably become tiresome. As a head-turner in Southern California it is a complete flop, but I imagine a Ferrari wouldn’t raise many eyebrows, either. Overall, I'd give it a C+.