How to Read a Car Ad    Comments

The modern automobile was invented in the 1879. Ben Franklin printed the first newspaper in the colonies in 1690, so naturally newspaper car ads have been with us a while. Newspaper ads for vehicles tout great payments, huge savings and other tempting terms. It is important to know how to read them so you aren't disappointed when you get to the dealership.

Now to see what everything says! 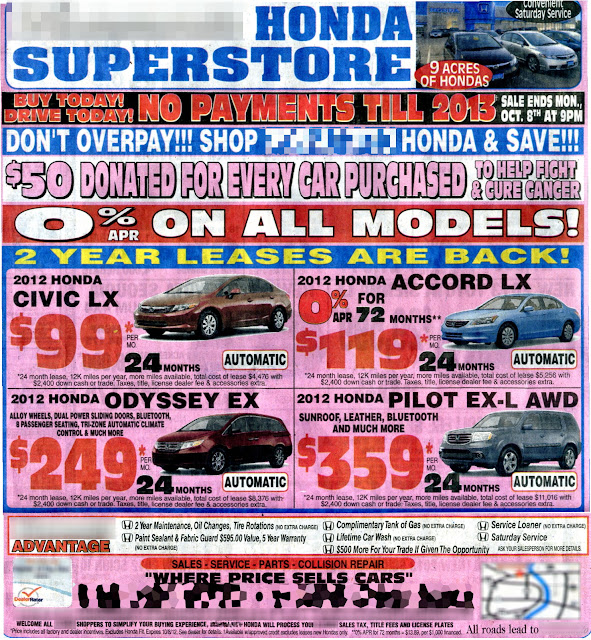 The first things everyone see is the huge headlines:

Now we check at the bottom.

Now, this next sentence can mean almost anything. Basically, unless Honda is offering 0%, the dealer can't offer it without "buying down the rate." Honda is offering 0.9% on some 2012 models. To get to 0% on those models the dealer will take some of the discount you would normally get on the car and pay it to the lender to secure the lower rate. On the excluded 2012 models and all 2013 models, the dealer will have to pay much more to lower the rate. Another key parts in this disclaimer: "Available w/approved credit." This allows the dealer a possible out. "Excludes leases," is interesting, because all of the payments quoted in the rest of the ad are leases. Leases don't have interest rates, anyway.

The largest print in this part of the ad screams $99! We also see this is for 24 months and it says "Automatic" which is important if you don't want a manual transmission. But don't expect to get a manual transmission Civic cheaper or even for the same payment: the residual on a manual will be lower, increasing the cost of the lease. (The residual is the amount the leasing company figures the Civic is worth when you bring it back in two years. They subtract it from the amount you pay for the lease. That's how they get a low payment.)
The rest of the important parts are in the small print.
First: "12K miles per year," means if you drive more than 24,000 miles during the lease, you could incur large penalties. 14¢ to 18¢ per mile are about average. If you drive 15,000 miles per year, the national average, this will cost you $840 to $1080 at the end of the lease. If you drive a lot more, you can change the mileage limitations, but expect the lease payment or the money down to change, too. Make sure you find out what the per mile penalty is. Be sure you get the appropriate mileage in your lease.
Next: "$2400 down cash or trade." If you are trading a car this time, you won't be trading a car next time, because you turn in the lease and walk away at the end of the term. Either way, you'll also need the taxes, license and title fees. Depending on where you live, a hefty chunk. Check your local laws and figure this out before you go.

For our next ad, we have some sale prices. 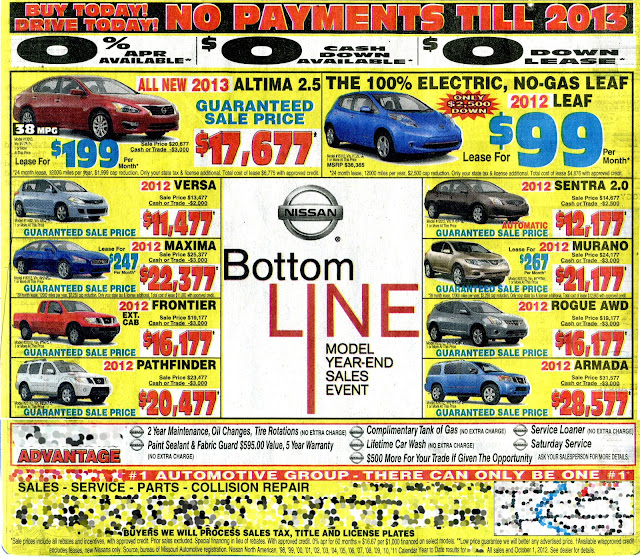 Lets jump right to the first car, the 2013 Altima: