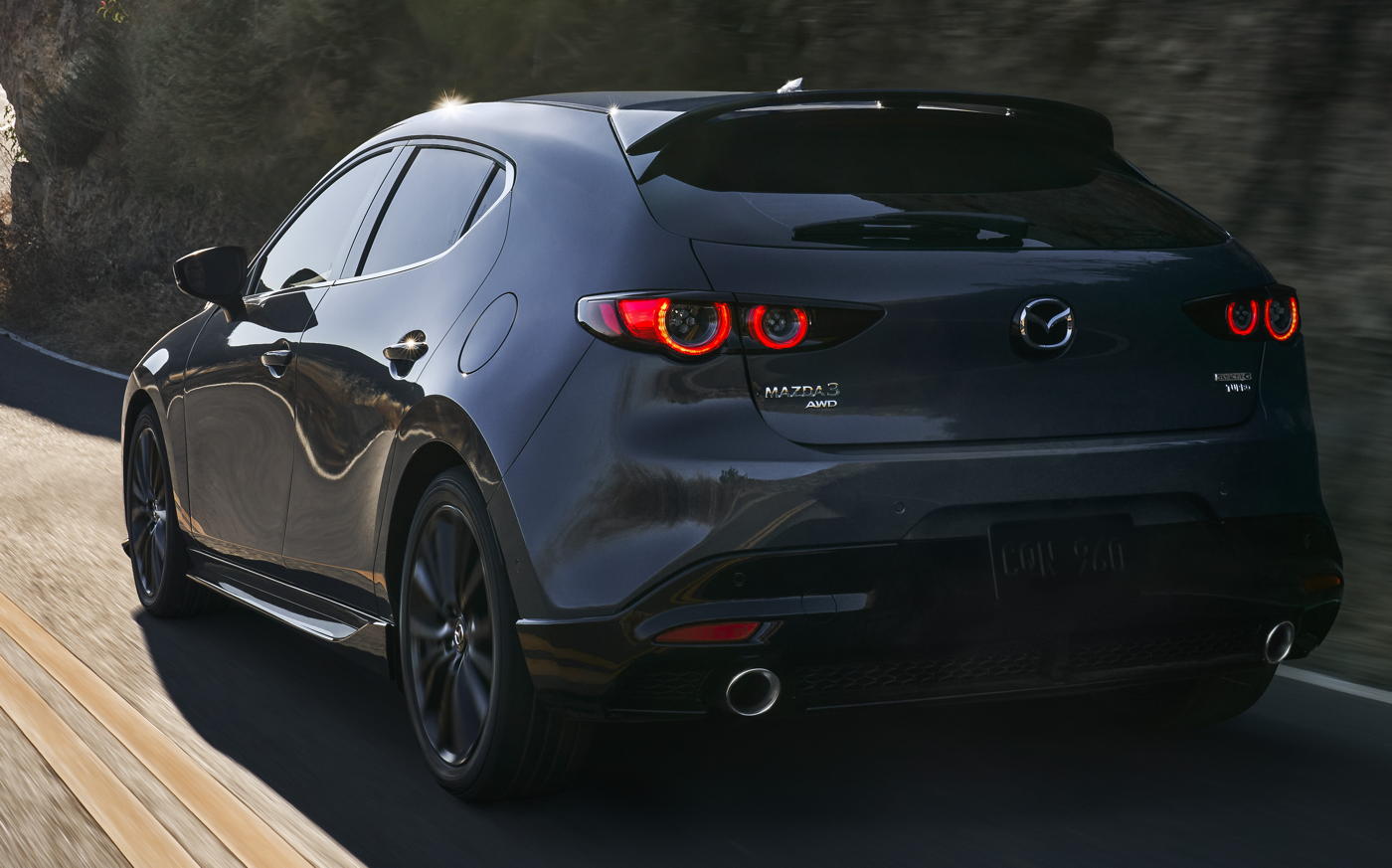 The gorgeous, redesigned Mazda3 sedan and hatchback were introduced with the larger of its two previous engines, and now its time to fill out the powertrains. The sedan gets a new, standard 2.0-liter to anchor the bottom rung with 155 horsepower and 150 pound-feet of torque. It will only be offered in front-wheel drive and with a six-speed automatic transmission. It's no surprise that the new, smaller base engine will be rated with the highest EPA mileage (28 city/36 highway), but not by much.

At the other end of the performance spectrum, the Mazda3 sedan and hatchback will offer Mazda's torquey 2.5 turbo 4-cylinder, with 250 horsepower and 320 pound-feet of torque. This powertrain will also only feature an automatic transmission (boo) but will be coupled exclusively with Mazda's i-Activ all-wheel drive, the only sane way to put that torque to the ground in a front-wheel drive-based chassis.

Its own model, the Mazda3 Turbo will be the lightest application of this engine which started out in the CX-9 SUV/minivan. Then it moved to the CX-5 and the Mazda6, and now its in Mazda's compact car. To finish painting the picture of the Mazda3 Turbo as a premium car, not a boy racer, it's equipped standard with keyless hands-free entry, Bose stereo, auto dimming rearview mirror, heated seats, heated leather-wrapped steering wheel, a heads-up display, and Radar Cruise Control. Performance cues are delivered by 18-inch black wheels, black side mirrors, larger tailpipes and a sprinkling of "Turbo" badges.

A new Carbon Edition includes gloss black trim over a metallic gray finish. The interior is finished in red leather with black stitching. The dash and center console reverses this scheme: black with red stitching.

Mazda6 Signature now features Rear Smart City Brake Support, a feature that automatically brakes when the rear parking sensors indicates an obstacle is almost in contact. A Driver Attention Alert is also now standard on Signature, monitoring steering inputs and setting off an alert if they indicate drowsiness or inattention.

Night pedestrian detection has been added to the standard automatic emergency braking system.

The "CX-3" badges get. new type-style and the key fob's design is updated.

The sensitivity of the standard automatic headlights has been increased.

Mazda is putting its 250-horsepower 2.5 turbo in almost everything. The CX-30 is getting it next, and it will come standard with all-wheel drive and a 6-speed automatic, where it is rated at 22 city and 30 highway MPG by the EPA. Black side mirrors wheels and a "Turbo" badge lets people know.

Apple CarPlay and Android Auto are now standard. Satellite radio and navigation computer are no longer offered on Preferred.

The cylinder deactivation feature is no longer offered.

A 10 and 1/4-inch touchscreen is now standard with an updated infotainment system, with Apple CarPlay and Android Auto now standard on all models.

A new Carbon Edition, based on CX-5 Touring with the Preferred Package, brings black wheels, grille and other trim, a red leather interior with black stitching and nineteen-inch black alloy wheels to replace the Touring's 17-inch wheels. The Carbon Edition can be optioned with the 2.5 turbo 4-cylinder from the Grand Touring Reserve and Signature line; but on the Carbon Edition the turbocharged engine is available in front-wheel drive in addition to AWD, marking a return of this combination on the CX-5.

A "Turbo" badge now identifies models with the pressurized power-plant.

A wireless phone charger is now offered, standard on Grand Touring and Signature and optional on Touring.

Driver Attention Alert and automatic rear braking are new and both are standard on Carbon Edition, Grand Touring and Signature.

A special edition will commemorate Mazda's 100-th anniversary. Expect a pearl-white exterior with a retractable roof or red cloth top. Oh, and badges... lots of badges.