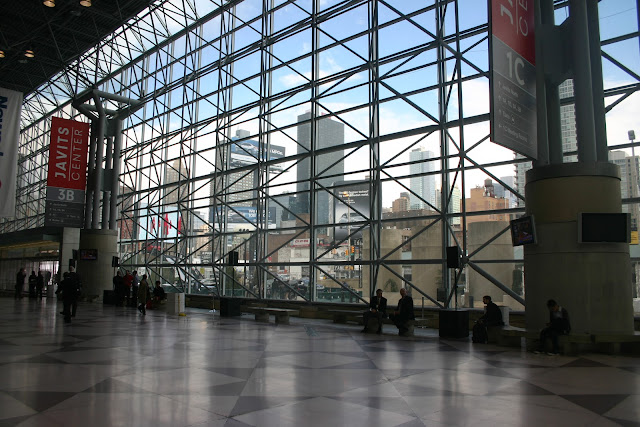 The MDX prototype has been shown at the Detroit and Chicago auto shows. At the NY Show we got to see the production version, and the full specs were revealed. The biggest news: with direct-injection (fuel injectors in the combustion chamber, like a modern diesel engine), the 3.5 V6 gets improved fuel mileage. The newly available FWD version is EPA rated at 20 city/28 highway/23 combined Miles per Gallon. The All-Wheel-Drive version is rated 18/27/21. This is significantly better than the 2013 model: 16 city/21 highway, partly due to a lower curb weight by 275 pounds. 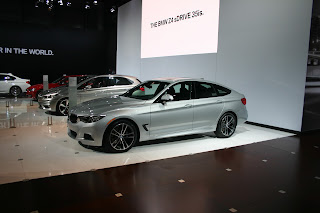 The new 3 Series Gran Turismo was introduced at the Geneva Auto Show a few weeks ago, along with the Sports Wagon. The GT is built on a longer wheelbase than the sedan or wagon, and like the 5 Series Sedan/5 Series GT duo, the GT is a higher level model than the Sedan or Wagon. It offers more rear legroom and higher standard levels of equipment.
The Wagon will only offer the 328xi powertrain, a 240 horsepower turbocharged 4-cylinder engine with All-Wheel Drive. No word on whether either the GT or Wagon will come in 320i guise with the 180 horsepower engine of the newly introduced 320i Sedan, but it seems unlikely.

New York saw the world premiere of the 328d. Touted as the next wave of BMW advanced diesel models, it uses a 180 horsepower 2.0 liter 4-cylinder turbo diesel to achieve an estimated 45 MPG highway mileage. Zero to 60 is in a little over seven seconds with the standard eight-speed automatic transmission. If you think of  diesels as smelly, slow, and loud, you probably had a rotary phone, a typewriter and your car had points and a carburetor, too. 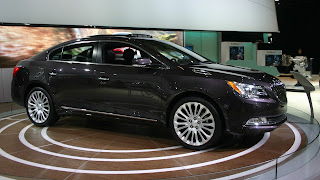 Buick pre-empted the show press conferences and got ahead of the buzz by introducing their refreshed 2014 Regal and LaCrosse two nights before the press preview to the show started.
The LaCrosse gets an all new interior which revolves around an 8” touch screen. If it looks familiar, that’s because Buick’s IntelliLink for the 2014 LaCrosse is basically the Cue system from the 2013 Cadillac ATS and XTS. Drivers can change functions using swipes, touches and pinches, which will be easy for iPad users, not so much maybe for traditional Buick owners. It is one of the better systems (with the Chrysler being the best I’ve tried), but the one in an ATS I tested had a dead spot on the bottom ½ inch of the screen where it wouldn’t respond to touches. Otherwise, the controls are large and the haptic feedback is useful to help keep your eyes on the road. The haptic feature can be turned off, but when on, the screen “bumps” against your finger or the other controls when you activate features.
The other major new feature is the configurable instrument display. On the sides are a traditional tachometer, fuel gauge and coolant gauge. In the middle, you can set it up in a number of ways, showing navigational directions, oil pressure and numerous other displays.
LaCrosse now offers the vibrating “Safety Alert Seat” that was first introduced in the new Cadillac XTS. If this option is ordered, warnings from the available Lane Departure Warning, Side Blind Spot Alert, Lane Change Alert, Forward Collision Warning and Rear Cross Traffic Alert vibrate the driver’s seat in areas coinciding with the direction from which the danger is. For example: put your left turn signal on while a vehicle is on your left side and the left side of your seat will vibrate vigorously, instantly alerting you of the direction of the danger.
The exterior gets a tasteful redo with soft lines. The traditional Buick portholes are more rounded and stylized. The grille is larger, and the bottom now includes active shutters to block airflow for better highway cruising mileage. The headlights come with optional improved HID lighting that turn in response to inputs from the steering wheel, helping to follow the road.
The powertrains are unchanged for 2014: Front-Wheel Drive 2.4 4-cylinder eAssist and a six-speed automatic or a 3.6 V6 with front or all-wheel drive.

The new 2014 Regal also adds a bucket of special electronic safety aids. Like its larger brother, it offers optional Rear Cross Traffic Alert, Lane Change Alert, Side Blind Zone Alert, Lane Departure Warning, Forward Collision Alert and also adds Collision Mitigation Braking. The latter system will automatically apply the brakes to avoid or lessen a collision if the driver doesn’t react to imminent danger in time. Regal doesn’t get the Safety Alert Seat at this time.
With the Collision Mitigation Braking system, Regal gets the Adaptive Cruise Control offered on LaCrosse that will hold a set speed or adjust speed to follow another car at a set distance.
Regal Turbo now shares the same engine as the GS, both with 259 horsepower, eleven less than last year’s GS but 39 more than last year’s Turbo. The GS is still available with a six-speed manual. 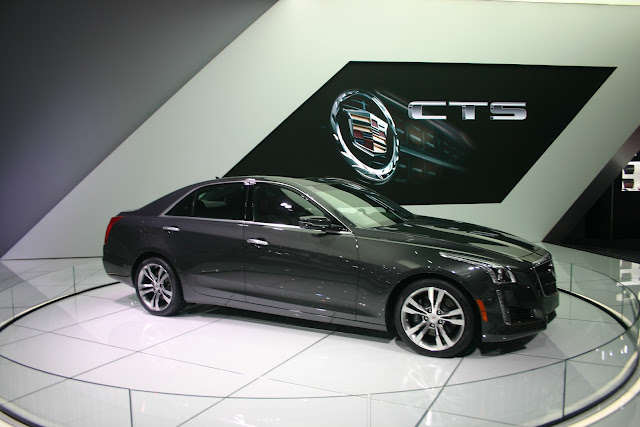 Cadillac, like Buick jumped the gun, introducing the new, 2014 Cadillac CTS to the world the day before Press Preview days.  The CTS is Cadillac’s highest volume car, and it previously held an awkward place (in Cadillac’s mind) in between the 3 Series and 5 Series BMW in size, prestige and price. With the new ATS a solid entry, the 2014 CTS grows in size, price and stature. What doesn’t increase is weight. Even five inches longer, the new CTS is lighter than the 2013. It also sports a 50-50 weight distribution, for sharp and balanced handling.
The new design is gorgeous. The signature feature is waterfall of LED lights. While all the other luxury automakers are doing horizontal eyebrows, the CTS went vertical. Well over two feet long, these Daytime Running Lights will guarantee that the CTS is not mistaken for other Cad