Your Mileage May Vary: Hyundai and Kia Overestimate Fuel Milage on 600,000 cars    Comments

On November 2, Hyundai Motor Company announced they were voluntarily adjusting the fuel economy ratings on many of Hyundai and Kia's 2011, 2012 and 2013 vehicles. Of course this spurred several lawsuits. 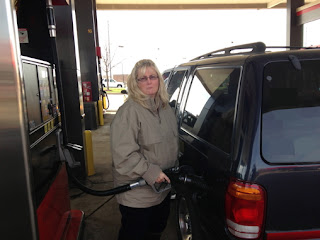 For years EPA (United States Environmental Protection Agency) fuel economy figures have been an issue that has confused or angered many people. The disclaimer "Your mileage may vary," is not enough to keep people from getting angry when they fill up and their fuel mileage is not what was listed on the sticker when they bought the car new. Complaints about the mileage figures on hybrids became so loud, the EPA revised their methods in 2008 for the first time since 1984, resulting in generally lower figures.

In February of this year, a lady in California won a small claims lawsuit against Honda. She claimed that her 2006 Honda Civic Hybrid never got the 50 MPG the Moroney sticker promised. THe judge awarded her $9867. (Remember, hybrids were the primary reason the EPA altered the way it calculates fuel economy figures in 2011. That Honda Civic Hybrid was originally rated at 49 city/51 highway, after the revisions, that same 2006 Honda Civic Hybrid would be rated 40 city/45 highway.). Honda is appealing the verdict.

How Do They Figure Mileage?

When they see the mileage figures on a new car Moroney sticker, people imagine guys in lab coats, sipping coffee while they drive around Washington, D.C. When the car they're in runs out of gas, they write some numbers down in their notebook and call for a big black government tow truck to come get them. Okay, that's what I imagine.

What they really do is quite different.

They test the vehicles on dynamometers, a giant treadmill for cars. The treadmill is adjusted using figures supplied by the automakers for coast-down friction, aerodynamics, and other factors.

Finally, they don't measure how much fuel is used. They weigh the exhaust fumes.

Also, the EPA doesn't usually even do the dynamometer test, either, but they rely on the automaker to do it. They audit a small percentage of vehicles randomly and test others if they question the automaker's results.

Hyundai engineers in South Korea responsible for performing the coast-down tests did not follow the proper procedures and got optimistic figures. These figures were supplied to the EPA and used to set the dynamometer at the EPA and at Hyundai/Kia.
Details aren't known about how these errors occurred. Hyundai insists it was an accident, and considering the fallout they face now, it's difficult to see how they would have deliberately committed fraud. Could a translation error or conversion error played a role? EPA tests all use metric measurements until the final figures for miles per gallon are derived.

How Much Do the Numbers Change?

Some cars were not affected, including: Hyundai Sonata non-hybrid, Hyundai Genesis Coupe, Hyundai Equus, Kia Forte, Kia Optima non-hybrid.
Others mostly were down-rated 1-2 MPG. The Kia Soul 2.0 ECO and 2.0 Automatic went down the most: 6 MPG on the highway. Below are all the changed figures for 2013. Follow the link below it for more information.

What Will They Do About It?

Hyundai and Kia owners affected will be eligible to receive debit cards based on the difference in fuel mileage and their annual mileage. An additional 15% is added for customers' inconvenience. These cards will be rechargeable annually as long as they own the vehicle. Potential reductions in resale value have not been addressed by Hyundai, but is part of the lawsuits filed.
Hyundai owners go here, and Kia owners go here to input their VIN number and find out their eligibility for debit cards. It is unknown if accepting one of the debit cards waives your rights for other compensation. You should fully read any language you are asked to affirm before applying for the reimbursement program.
Testing the site gives a $115.10 annual reimbursement for a Kia Rio Automatic driving 15,000 miles in Missouri. 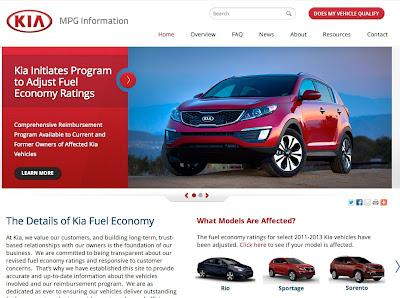 Some industry analysts are predicting this scandal will drive sales that would have gone to Hyundai and Kia primarily to Honda, the previous industry leader in fuel economy before Hyundai took the title in 2010 (before the ratings in question took effect). One source, Strategic Vision, estimates Hyundai sales could go down as much as 11% in the next few months.
Comparisons to Toyota recalling cars for accelerator pedals that stick are inevitable, but a closer comparison is to the Chrysler odometer scandal in 1987. Safety will always be a more compelling issue than economics. The Chrysler scandal actually led to indictments against Chrysler and two of its executives for disconnecting odometers on vehicles its executives drove. A very forthright apology from then Chrysler CEO Lee Iacocca went a long way to undoing the damage, along with extending warranties on vehicles that had had odometers disconnected, and replacing cars that had been damaged and repaired. The Chrysler scandal only involved 60,000 vehicles, but it did result in criminal indictments.
Overall, the strength of Hyundai's and Kia's reimbursement program and their honesty in their apology will determine the effect on sales. I think they also need to add a program for resale value reimbursement when customers sell or trade their affected vehicles. Any such program should reimburse owner's regardless of how and where they sell their vehicle, but Hyundai and Kia can turn it to their advantage by offering even greater rewards if the affected vehicles are traded on other Hyundai and Kia vehicles.