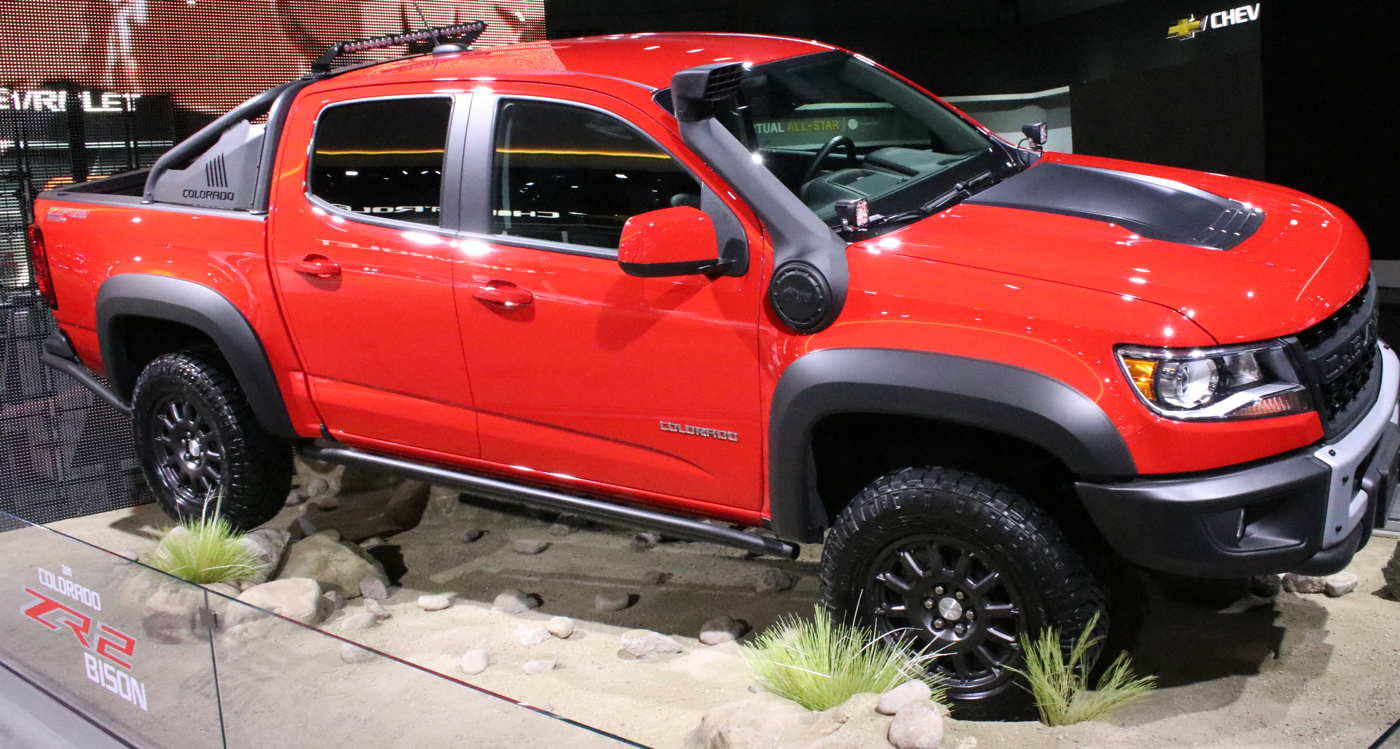 As sedans die, an all-new sport utility rises up: the Blazer. Bringing back a revered nameplate makes good business sense. So does entering a niche where your competitors have been successful. The Blazer will compete against Ford Edge and Nissan Murano for the mid-size, five-passenger crossover customer. With a 2.5-liter 4-cylinder or a 305-horsepower V6, a nine-speed automatic and front or all-wheel drive, it will have good credentials in the few or no kids, young suburban arena. This new Chevy sits between the Equinox and the Traverse in size and price.

Tire Fill Alert is now offered, standard on all models. This feature will beep the horn when you reach the proper inflation while pumping your tires.

If you're buying your own Bolt this next feature doesn't affect you, but fleet operators can order their Bolts with a smartphone interface which will allow the Bolt to be started with a secure app, including by people renting the Bolt. Start the car with you phone is officially here.

The Camaro gets a refresh with a new grille, fascia, bumpers, headlights and a new hood. The Chevrolet Infotainment systems are improved, coming in either 7 or 8-inch touchscreen versions.

Forward Collision Alert is offered on the Camaro for the first time, optional on LT and SS and standard on ZL1, but just the coupes.

Satellite radio and power seats are no longer available on the Camaro LS. A new display for the HD rear camera is in the rearview mirror on the ZL1 and optional on the SS.

This little Nissan-built van is no longer offered at Chevrolet dealerships in 2019.

The 6-speed manual transmission has been dropped. Only offered with the 4-cylinder and 2-wheel drive, too few ordered it. Must have been a last minute change since it is still listed on the EPA web site.

The radios (infotainment systems) in the Colorado are all new. LT, Z71 and ZR2 models get a new high-definition, digital backup camera. Other models still have a standard backup camera with a lower resolution.

A heated steering wheel is now offered: optional on LT, standard on Z71 and ZR2.

A new Rear Park Assist system is offered on all but base models. It uses sonar to warn the driver when he backs up.

The BIG NEWS this year for Chevrolet is the 755-horsepower Corvette ZR1. Available as a coupe and convertible, this car lays claim to the third most powerful super-car engine (behind Ferrari 812 Superfast and Bugatti Chiron) and already holds the record for a production car at Virginia International Speedway (2:37.25). Since the Corvette costs a third of the Ferrari and a thirtieth of the Bugatti, its third place horsepower is perfectly acceptable. Besides, a box of cash hardly guarantees you either the Ferrari or the Bugatti, but absolutely guarantees you the purchase of your ZR1.

The ZR1 includes 15.5-inch front and 15.3-inch rear ceramic brakes that are also optional on the Grand Sport and Z06 Corvettes.

ZR1 customers will be able to order the "Custom Engine Build Program," allowing them to travel to the factory in Bowling Green Kentucky and help assemble the LT5 supercharged engine that will be installed in their Corvette.

A restyle for 2019 includes a new grille, fascia, bumpers, headlights and taillights. Infotainment systems are improved, including a 7-inch touchscreen. Just in time for GM to discontinue it. Sales and production will continue through to Summer.

The biggest news for 2019 is: no more manual transmission in the Cruze! A six-speed automatic is now standard with the gasoline engine and a nine-speed comes with the diesel. Start-stop is still standard on automatics (all Cruzes, now) but a new override is standard for people who are annoyed when their car shuts off all the time.

The Cruze Diesel becomes its own trim-line, between LT and Premier (previously it was an option on the LT). Cruze Hatchback is now available as an LS trim, the new base trim for the hatchback.

Keyless access standard on Cruze Diesel and Premier and optional on LT no longer haves switches on the rear doors for hands-free keyless entry.

The Chevrolet MyLink audio systems are replaced by "Chevrolet Infotainment 3" systems. The higher level "Plus" model includes a new SD card reader in the center console, along with a stereo input jack and two USB ports.

235/50R19 tires on 19-inch wheels are now available on LT and LS models; previously they were only offered on Equinox Premier. LED headlights are also available on Equinox LT.

The last traditional American van now offers optional Forward Collision Warning and Lane Departure Warning. To prevent accidentally shutting off the engine, the ignition key must be pressed in first. A new theft alarm is optional.

Slow sales and lower profits means 2019 is the last year for this award-winning sedan. No changes.

The Malibu is one of the 5 Chevrolet models to be redesigned or refreshed for 2019. The front and rear fascias, bumpers, grille, headlights and taillights are all new. An RS model is now offered with blacked-out trim, rear spoiler, 18-inch wheels and leather-wrapped wheel and shifter. Malibu Premier gets LED headlights, standard.

The 6-speed automatic in the Malibu with the 1.5-liter turbocharged engine is being replaced with a CVT (Continuously Variable Transaxle) in order to improve fuel mileage.

The 120-volt power outlet is no longer available except on Premier, as standard.

A couple dimes are squeezed by eliminating the switches on the rear doors for hands-free keyless entry. But, bluetooth is now standard on Malibu L, making it standard across the board.

An all-new pickup doesn't come around that often, even these days. The Silverado is pretty new. Its engines sound familiar (4.3 V6, 5.3 V8, 6.2 V8) and they still have pushrods and two valves per cylinder, but these engines can run on as few as two cylinders! And they have two new buddies: a 2.7-liter turbocharged, all-aluminum four cylinder and a 3.0-liter turbo diesel. The 4-cylinder is the first in modern history in a full-size pickup; it has 310 horsepower, actually placing it between the 4.3 V6 (285) and the 5.3 V8 (355). It has automatic start/stop to save fuel in traffic and it can actually run on as few as two cylinders. It will be mated with the 8-speed automatic transmission. More details aren't available on the new diesel engine, but it is expected to offer the highest fuel mileage and will be mated to the new 10-speed automatic.

The new Silverado will be offered in Crew Cab with a short or medium box, Double Cab with a standard box and a regular cab with a long box. The regular cab will only come in the long bed work truck configuration with either the 4.3 V6 or the 5.3 V8 and a 6-speed automatic. 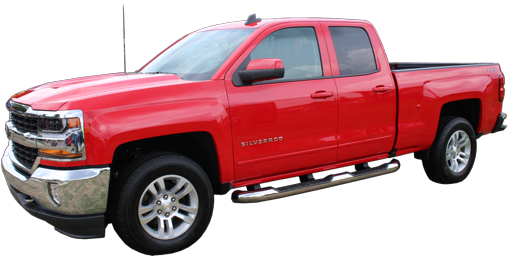 The previous generation Silverado, first released as a 2014 model isn't that old, especially when compared to the traditional pickup life-cycle. As a brand new Chevrolet Silverado is being built for the 2019 model year, the previous Silverado will continue in a "LD" form. The Silverado LD will be available with one engine, the 355-horsepower 5.3 V8; one transmission, the 6-speed automatic; and one body style: Double Cab.

Available in two-wheel-drive and four-wheel-drive, the Silverado LD will be offered as a base work truck or the LT. LTZ and High Country trims are gone, transferred to the new truck. Midnight Edition, All Star Edition, Texas Edition and Z71 Off-road packages are still offered.

The EZ-Lift and Lower Tailgate is now standard.

The heavy duty version of the Chevrolet pickup line is not redesigned...yet. Their redesign will come next model year: 2020. For 2019 a Regular Cab is not offered. The Silverado 3500 only comes in a Crew Cab; no Double Cab.

In the meantime, power windows are now standard on all models. Work Truck and LT models get a new chrome and mesh grille. A Silverado HD Tribute Edition is available with badges and black bow ties.

The reports of the Chevrolet Sonic's death have been exaggerated. But, even Mark Twain had to die sometime and the Sonic is living on borrowed time. The 138-horsepower 1.4-liter 4-cylinder is now the standard engine; the 1.8 non-turbo is not offered.

The infotainment system is new and improved and has a 7-inch touchscreen. It has two new standard USB ports.

Last year the Tahoe got an RST model with a 6.2 V8. This year the Suburban gets the same treatment: a 6.2-liter V8 and a 10-speed automatic.

The heated steering wheel on Premier and High Country is now automatically activated by temperature.

The Volt's new optional charging system can fully charge in less than two-and-a-half hours when plugged into a level 2 charging station.

Volt gets Chevrolet's new corporate 8" touchscreen infotainment system, but with a new App to help conserve and monitor energy.

A power seat is available, 6-way and standard on Premier, optional on LT.

If you rent a Volt or use it through a car-sharing service, you may start the Volt with your phone: a new smartphone interface is available, though only on fleet orders.

Finally, the Volt will now make a "whooshing" noise when in electric mode. The sound will increase as speed increases, alerting pedestrians and birds of its approach.

The Volt shares a platform and factory with the Cruze and thus will go out of production after 2019 unless something changes. It's powertrain could find a place in a sport utility, but it would take a few years to make that happen.