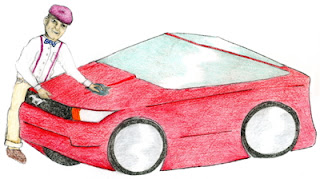 Mr. Casey carefully waxed the fenders of his 2019 Ford Mustang. This was one of his favorites, not only because it didn't have any nano cleaning technology, allowing him the luxury of washing it hands-on, but also because it burned liquid petroleum fuel. It was trouble to find, store, or keep from going bad, but it was special, different. A few cars in his collection had old-fashioned chemical batteries, but those didn’t have the same appeal. Not to mention the fact that those gave Mr. Casey much more trouble than the gas engine in the Mustang.
His 2024 BMW i30 had lithium ion calcium sheet batteries, hardly cutting edge when the little run-about was sold. The first car powered by integrated-circuit super-capacitors printed on wafers of silicon was sold in 2028, making all the messy, dangerous chemical batteries instantly obsolete. That lithe, powerful 2029 Acura XRL had a range of 950 kilometers, ridiculously small by today’s standards, but over double the range of chemical battery cars costing double what the XRL cost in 2028. But even more importantly, it would fully charge in five minutes… every time, without any damage or overheating.
Mr. Casey finished polishing the Mustang’s headlights and said, “mustang hood” under his breath, causing the hood to open and rise slowly, revealing Mr. Casey’s favorite part of the car: the 2.5 liter turbocharged four-cylinder gasoline engine. No mere generator for a chemical battery pack, this power plant drove the rear wheels through a transmission with twelve different gear ratios and a driveshaft. Internal combustion drove the pistons, spun the flywheel and moved the car directly.
His friend, Manx, always gloated over his hydrogen fuel-cell powered Toyota Prius h, but as rare as a hydrogen fuel cell car was, Mr. Casey couldn’t get excited over the silent, un-dramatic hatchback just because it had finicky pressurized tanks of hydrogen. The Prius h injected a pressurized stream of gaseous hydrogen into a sandwich of plastics, platinum and other exotic materials.
Technically interesting, this approach was a complete dead end. You would burn natural gas or coal, or maybe even use wind power; then you transmit the electricity for miles, use it to electrolyze hydrogen, cool the hydrogen and pressurize it into heavy metal cylinders, then pass it through a fuel cell to retrieve the hidden chemical energy. Even if the storage of the hydrogen wasn’t so wasteful, or if hydrogen stations had sprung up, just the expense of the fuel cells, crammed with platinum and other exotic metals doomed hydrogen as a motor fuel. In the same space, a hydrogen car could only store less than 10% as much energy as a petroleum-powered car.
Spritzing a fine mist of cleaning fluid on the ceramic top of the engine, Mr. Casey polished the shiny intake/exhaust manifold. Here, as one of the final steps in bringing the efficiency of internal combustion to its peak, the Ford engine ran the exhaust next to the intake, super-heating the air going into the engine. This process would transfer the previously wasted heat back into the engine, where only its ceramic, carbon-fiber parts could withstand the 2500 degree Celsius temperatures. Before transferring the last of its energy back into the engine, the exhaust ran the turbocharger that boosts the engine power.
Next to the large primary turbo-charger was a smaller turbine. Spinning off the extra exhaust gases, the smaller unit runs an alternator that provides the power for all the car’s electrical needs that the regenerative brakes don’t. The engine in Mr. Casey’s Mustang didn’t need any belts to provide electrical power, or cooling or other functions. The power-assist for the steering was electrical, as was the oil pump and water pump. The Mustang’s climate control used a solid-state Peltier thermoelectric heat pump.
“Close,” Mr. Casey said, and the red carbon-fiber hood pulled itself down and latched quietly. He put away his cleaning supplies and walked into his house, leaving his collection behind. A minute later the lights in the garage went out.