Recalled: When You Get the Letter    Comments 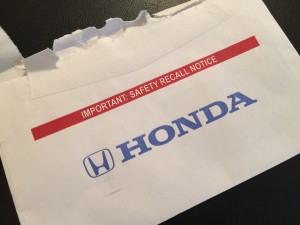 What happens when the latest headline arrives in your mailbox? The Takata recall has affected 34 million vehicles in the United States, and holding my own recall letter, I realized mine was one.

My Honda Odyssey had been accumulating a stack of envelopes marked "IMPORTANT: SAFETY RECALL NOTICE" at home during the semester, but it wasn't till I visited during the Summer and opened them up that I realized my vehicle was affected by the same recall that Takata's president recently apologized for.

I had been in an accident the previous year where I hydroplaned into a ditch in the early morning, and while it hadn't deployed, the idea of the airbag meant to save my life spraying me with shrapnel instead  was enough to make me call the local dealership like I should have a couple months before.

After redirecting my call to the service department, I was asked for my VIN number, unfortunately I didn't have it on hand, so I looked it up and called again. This time they already had it on file as soon as I gave my name, but either way, it only took a minute to make an appointment and receive a time estimate—three hours since my vehicle had four recalls in total. It seemed my poor Honda had a few extra recalls beyond the Takata airbag inflator.

A week later I found myself at the dealership and after a quick sprint through the rain and the parking lot made my way inside and to the service department. They confirmed my information and service time and I took a seat in the waiting room. I saw a dozen or so people arrive, wait, and leave during my stay, but when they were fetched none of their vehicle summaries seemed to involve the Takata recall. The coffee pot was refilled twice and the complimentary muffin basket vanished at some point (luckily after I grabbed one!) but otherwise it was an uneventful wait that ended after two and a half hours—thirty minutes ahead of schedule.

"How long would it have taken with just the one recall, the airbag inflators?" I asked. Most people get out in forty-five minutes to an hour with the most common recall. I was told the dealership had been receiving a high volume of recalls, though I was unable to get a number.

The rain had ended and I returned to my vehicle, finding the keys in the driver's door. I hopped in and drove home, glad to have my mini-van returned and more safe. 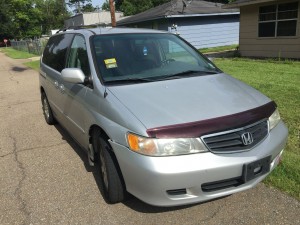 Unfortunately, many drivers have been unknowingly in danger. If you've received a recall letter, don't neglect it like I did—peace of mind may only cost you a phone call and a slice of an afternoon.

If you want to check if your vehicle has been recalled, go to NHTSA.gov to check.